What I'll Blog About Today

This could be specific or in general I suppose.

In general as a player I think I like it when I achieve some aspect of a goal I've set myself. Usually that goal is to be able to do more things as a M-U.  Finding a blur or blending spell and putting it in my spell book feels good man.  But also, cobbling together complex results from simple pieces.  In 4e with invisibility, an undead minion ritual, and some cantrip ventiloquism, I was able to project a creepy image of my mage while protecting my own identity.  One goal I never got to achieve was design and build my own tower.

In general as a DM, I feel like a kid showing his parents some lego creation as the players reach some feature of my dungeon: "Ooh, wait till you see what happens when you pull that lever!" And that doesn't have to be just about dungeons, it was the same pleasure to see them unroll the relationship triangle between the npcs on the junk Haiyan.

But one specific moment that was important to me was to be able to go down to LA and run Tavis and Staples and others through the Undertavern.  I've loved D&D most of my life but been completely cut off from the culture and to be able to make an adventure from someone else's requests (it was a SAGE request), and then run it with real gamers and DMs, and see everyone have fun, was very validating. 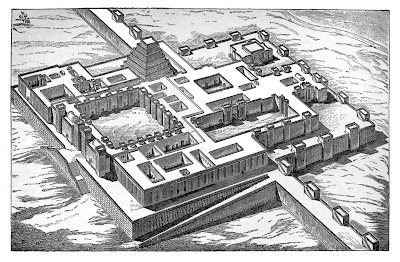 Thanks for reading have a pic of Sargon's Palace at Khorsabad. PD.
Posted by Telecanter at 11:57 AM