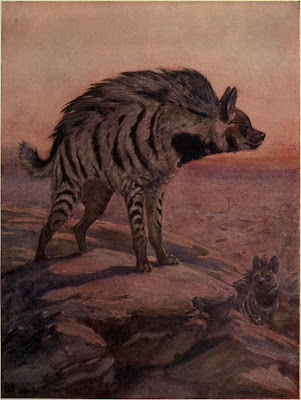 It's funny how much time I put into two charts that are essentially the same thing-- 100 animals-- because they were for different purposes.  The animals for the arena were meant to be exotic and outrageous fighting each other.  This chart is meant to encompass as many archetypal animals as I can on one chart.

The idea here is if you have a machine that mixes and matches animal parts, those parts better be pretty distinct in the player's mind.  So, weasel and ferret get to share a line (if you're more familar with one pick it, if you get tired of weasels pick the other).  No mongooses, no wombats. Had to cut the gnu.  No eland etc.  It's heavy on domesticated animals because I'm pretty sure we can all see a pig or goose clearly in our head.

I envision this chart's d% would be rolled simultaneously with other dice to let you know if this is group, young animals, oddly colored ones etc (still working on that).

The only problem, after going through many drafts of such a seemingly insignificant chart I started thinking, an important part of collecting/mixing/mashing fun is rarity.  Would it be better on this island where an ark has crashed, and animals run free, to just have mayhem and roll on this chart?  Or to have a few, say 4 or less, regions which would allow hunting for rare creatures?  But which creatures would be rare, the coolest?

I had originally intended to split out all the birds, but the numbers just didn't work out.  I still intend a Wet version, with all the fish and sea mammals etc.  And a dinosaur chart.  And insects.  Heck, if nothing else, maybe you'll be able to use these as weird summoning tables.
Posted by Telecanter at 8:53 PM