Making your own digest sized booklet is like a Jedi making their own lightsaber right? 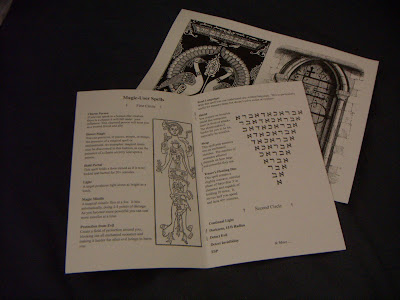 I took all my streamlined handouts and mashed them together to make a booklet. Unfortunately it is not wirebound like I planned, maybe the next draft.

It was a pain in the rear to do because I probably did it the hardest way possible. I started with Open Office, flipped the page to landscape, made two columns and started editing my one page handouts to make them fit nicely in the two column layout. But to make a booklet work, the pages have to be in a different order, so I had to, then, cut each page and place them into a new document in their respective place.

I was trying to have just what a player new to Swords & Wizardry would need to make a character. So, those new players are the intended audience. It doesn't contain too much explanatory text, though, because I assumed I would be there verbally walking them through it.

The picture above is pretty bad, so here is a link to the pdf I printed from if you're interested. (the pages are in the wacky booklet order, though). Very house ruled. I edited cleric spells and magic-user spells a little. I threw my rogue class in the back in case someone just couldn't be satisfied with a fighter that steals.

It was fun. I love the homebrew aspect of the OSR. I want to run this through another draft. Having made it I want to make something a little more sophisticated. Watch out OSR publishers! :)
Posted by Telecanter at 5:29 PM