The Genius of D&D

I realize chance has played some part in Dungeons & Dragons becoming a cultural phenomenon in the 80's. I also realize there are many other games out there loved and played by diehard fans.

But I think D&D is the flagship of the field and what pops to mind when the average person thinks of roleplaying games for more specific reasons.

I think D&D had two strokes of genius:

How many games have dealt with the "problem" of D&D's "unrealistic" combat? Over and over I've seen solutions offered to this dilemma that never became as popular as the original. I remember long ago reading xeroxed copies of Arms Law critical tables and thinking how cool they were. What others? Chivalry & Sorcery? Runequest? Even Tunnel and Trolls added piecemeal armor to the mix.

When I say D&D I mean the way I most commonly encountered it played. So even though AD&D included weapon vs. armor modifiers, I have never seen anyone use them in play. I think this aspect of AD&D, along with weapon speed, and rules for helmets etc. fit my premise: adding more detail to D&D's combat does not make it better. If by better you mean easier to understand, quicker to use in play, and, following from that, easier to keep several people around a table interested.

I think it makes perfect sense that wargamers would understand this sense of abstraction. The very figures on their sand tables that would later give birth to adventure gaming did not represent individual humans, but some varying number of troops. Or some abstract representation of unharmed, battle-capable troops.

Success is Abstracted as Treasure

I love the idea of playing Boot Hill, Gang Busters, 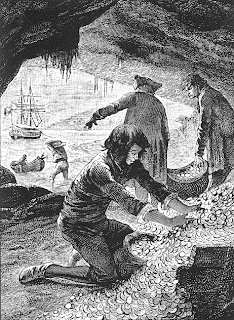 and various other games but often ran into the problem of: what is our goal? I vaguely recall reading about the playtesters of Boot Hill making the "winner" the player that left a ~5 mile radius of the town with the most money, which seems very unlike the most archetypal westerns.

I also remember the few times I DMed horror games thinking: so is the purpose of the PCs just to survive? To return things to normalcy? Why wouldn't they run to Alaska at the first sign of horror?

And with our beloved superhero games, too; every adventure was about PCs trying to maintain status quo against forces attempting to upend it.

Don't get me wrong, we had great fun fighting various nefarious supervillains. But usually it involved the adventure coming to us. "Uh oh, the Psimaster escaped from prison again." And if I were to sit down at a table to play a superhero game right now, I would be waiting to see what the villains would do. Did they poison the city's water supply, infiltrate our team as a clone, blow up our not-secret-any-longer headquarters? How the villains were bringing it to us.

In old school D&D we know what our goal is, the DM just needs to give us some guidance on where to find it. Tell me where the bugbears are and I'll take it to them.

I suppose what I'm saying is, even though I know people have mocked D&D's treasure hunting aspect as juvenile and unsophisticated, it is inherently active, while games with more "sophisticted" goals seem much more passive. You have to figure out what to do, either from the prodding of the events in the DM's world or from the collaborative input of your peers.

I think, much the way D&D's combat system is just the right amount of detail to give a sense of conflict while working well in play, D&D's treasure hunting goal is enough of a reason for us to go out into the shared, imagined space and risk our imagined lives. Seeking treasure is inherently graspable by human beings.

Whatever RPGs or adventure games look like a hundred years from now, I would wager the most popular, those with the most vibrant communities of players, will have these two characteristics.

A few final notes: Oddly, I don't think D&D's class based player characters are all that essential to its success. As well as it works, and is an abstraction itself, I imagine you could have a more freeform system using archetypal abilities that would work well-- I just think most skill-based systems sort of miss the point and are inelegant and clumsy.

And maybe one of the reasons abstraction in D&D works so well is Zak's idea of distance. Because we aren't really trying to immerse ourselves in the experience of being a dwarven gladiator, systems that religiously try to assist us in that are also missing the point. But I think it probably has more to do with the fact that abstractions give us something to work with and then get out of the way. Specifics keep getting in the way of their own aims in counterintuitive ways.
Posted by Telecanter at 8:37 AM