This is another of my Spurs. It uses the wonderful Grim's Roll All the Dice Method. It takes more work than a chart to use, but it is infinitely reusable and unique to the person using it at the same time.

This is a revision of my failed Magic Item spur. I've basically yanked out everything but the magical effects. Because of that I called it the Magical Effect Spur at first, but realized this doesn't include things that might happen to unlucky adventurers like getting shrunk or having their faces break out; it is more accurately a Spell-Like Effect Spur.

Because of its abstract nature it may take a little work to figure out what the effect actually is. But that's okay, its meant to be generative. So, you can either roll these up plenty of time before play and try to figure out how you might interpret the inscrutable results, or--and this is the option that is more fun and exciting to me--enlist your players to help you come up with a suitable effect.

So, to make it a little less abstract, let's use an artifact as an example:

The Crown of Cedifer the Sullen

As for that of most powerful artifacts, little is known of the history of the Crown of Cedifer. 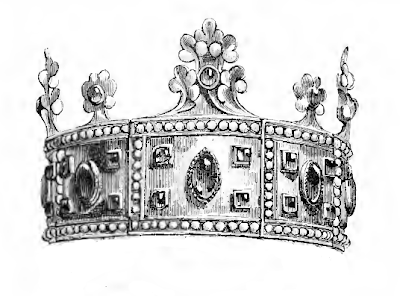 It is known he ruled several centuries ago, that his reign seemed set upon by misery; first his heir died in battle, then a daughter died to plague. He must have called for the creation of the crown because its craft is unmatched and only the best in the land could have made such an item. Some speculate he meant it as a penance to save his remaining children, some think he meant it as a cruel illustration of the stray hands of fate.

Sometimes called the Fickle Crown, or the 999 Laments of Cedifer, this iron band is set with pale, clear stones. Stories say, the power of the crown is invoked if set upon a persons head and they speak a phrase with a number. For example: "This is my first lament," or "Fate is fickle in 77 ways." The exact phrasing is lost to history, but when spoken a spell-like effect will occur. Sometimes these effects are of great power, sometimes a fatal curse.

Demarth of Karthon is said to have carved an empire for himself just with the power of the crown, only to be turned on by his own guard one day. He attempted to invoke the 665th lament of Cedifer and disappeared forever along with the Crown.

Some notes: the Crown is just an example. I don't know how it might work in play. You might let it have 999 unique powers that can each be called once per day, or just have the crown itself be used once per day. 999 magical effects a day may seem very powerful, but the player would have to discover ever single one, they are often quite specific, and sometimes detrimental to the player.

Okay folks, lets see what powers might result at the table:

area of effect, attack/transport, range 10', for 1 round, conjure mineral

Okay, I'm seeing something like a meteor storm. It rains down earth in an area within 10'. The transport aspect I'll say is that the meteorites are permanent and can be used to fill pits and form bridges across ravines.

My first reaction: WTF! But, okay, we can work with this. This power lets the user alter their appearance-- actually alter, not just an illusion--to that of a demi-human for up to 6 days. Very useful for infiltrating the mines of the rabid half-gnomes.

Here's a little problem: what to do with the range category when you roll wielder or touch? Maybe that could be some kind of power level; a 1 would be harder to save versus/ cause more damage than an 8.

Hmm, this is hard work isn't it, but the pay off is worth it, don't falter on me: Within 40' the user can cause one target to age incredibly; living creatures, doors, and locks will all crumble to dust.

The user touches a target, petrifying them and most likely killing them in the process. In 1-6 rounds their bodies return to flesh.

There you have it. Have fun.
Posted by Telecanter at 1:34 PM