Haha, with one question all the wonderful theory about letting a world emerge becomes problematic. Yes, after finding a hoard of thousands of silver coins they could barely carry my players asked about banks. When I reminded them that the place they got their mission from was just an inn, barely a wide spot in the road, they decided to set out for a town. So, where is the next town?

To be honest, other complications were arising for me about letting a game world just emerge:

I have certain things I'm interested in as a world builder

I like the subject of ancient Rome and like the shadow it casts over the ages after its fall: documents, inscriptions, lost 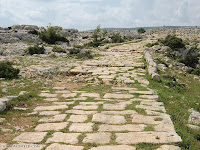 I'm not sure. Maybe what I really need is a way to randomly generate what a hex contains. Something like discussed here. But that would require a little work on my part to explain odd results: "Why a imperial fort here, when there isn't another for hundreds of miles?"

What is outside of the close focus

This, the where-is-the-next-town-problem, is more problematic. Even if you had a way to randomize terrain and points of interest that you were satisfied with, building a world around player movements is not going to tell you where the nearest X is outside that ring. Unless you randomize that too and just roll miles until next town, or something.

There are patterns and relationships in the world

But everything isn't just random. I'm thinking of the missions that Spaniards 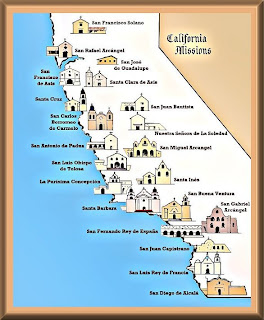 built along the California coast. It would be cool if players encountered a pattern like that to use it to find the next dungeon/fort/mine location. But what set of complicated charts is going to generate that for you?

Or the ways cities usually form in certain geographic settings. Or the way cities have certain areas of influence.

I think like much of old school philosophy the secret to success lies in how we utilize randomness to our advantage but without fetishizing it. So maybe, as long as using some randomness lets me loosen up and actually create a world without needing to know every single detail in advance, that's a good thing. But it also doesn't mean I have to go completely random, with things falling onto the map without rhyme or reason.
Posted by Telecanter at 7:15 PM