Work is busy and I'm gearing up for a big conference next week, but I have been working on a "fatter" version of the tower location I shared with you earlier.

What I mean be "fatter" might be interesting to you because it isn't what some people call "fluff," campaign backgrounds and NPC stories, etc. At least I don't think it is. I'm trying to think of what you might need as a fellow DM and what you would rather do on your own, so labor intensive stuff etc.

The Tower of Science is magical so, it stands to reason you might want it to appear as a set of rooms in your megadungeon. To that end I made a map, still need to revise the key-- the puzzles have to interact a little differently because of the new layout. I also need to put some columns and stuff in the huge central chamber. Any way release early and often: 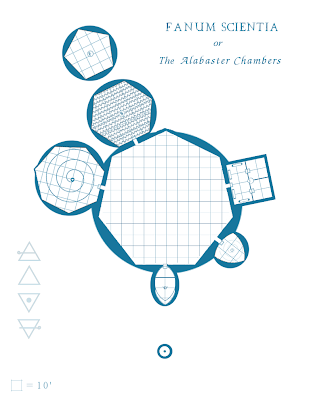 Posted by Telecanter at 6:53 AM