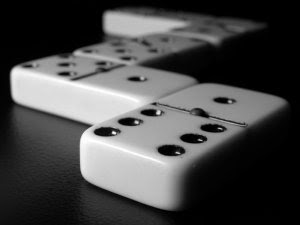 I was sort of obsessing over dominoes over the weekend. I love the way they are so similar to a six sider, like a d6 exploded, like some tesseract version of a d6.

So, some things I sat down and figured out that I hadn't known before: in a double six set of dominoes there are 28 tiles total. Each number, 0-6, has seven tiles. There are seven doubles.

Because of the way the pips work, there are more occurrences of some numbers than others. I made a little chart of occurrences over pip total.
Hmm, not so much a bell curve as a step pyramid. 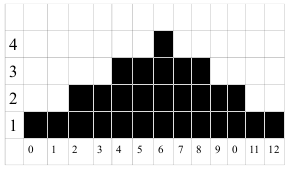 So, if you find yourself stuck in a vacation cottage with no dice but a set of double six dominoes, even though the number range is so similar, it isn't really possible to simulate six siders. Telling your player to draw a 6 from the bag of dominoes is less than the chance of rolling a 1 on a d6.

If you tell your player to draw any tile with a certain number on the tile-- not the pip total, but one of the sides of the domino-- the chance of success is 25%. Drawing either one or another number, say any tile with a 5 or a 6 on it, would be a 50% chance. The chance of drawing any particular tile, say the 5/6 is ~3.6%.

Again, doesn't seem too useful a range of probabilities to use in play to determine outcomes, but I haven't given up on the shiny bones! I was racking my brains trying to think of a way to use them to produce a simple dungeon generator. I also think they may be a cool way to do a NPC reaction minigame. I'll post more on those two possibilities later.

In the meantime, have you used dominoes in a roleplaying game? Have you heard of them being used?
Posted by Telecanter at 6:24 AM