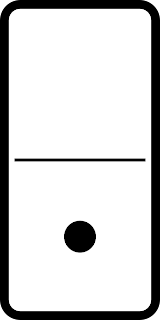 Okay, I'm a goofenheimer; in trying to ascertain the usefulness of a regular set of double 6 dominoes for randomization, I decided the probabilities produced weren't very useful. But I didn't think of limiting the dominoes to draw from!

And because dominoes have the odd quality of including blanks, you can pull all the blanks (except the double blank) and have six tiles from 1-6. The chance of pulling a number is exactly the same as rolling the same number on a d6.

So, there you have it, I have solved the great stranded-on-a-desert-island-with-no-dice-but-ahh-we-have-dominoes-problem. Pull the one through six blanks, put them in a black velvet bag (all DM's have one right?) and let the player draw a tile. After drawing, place tile back in. Stir. Repeat.

Actually, by selecting the dominoes available for your drawing pool (so you have to choose 1 of the four tiles that have pips adding up to 6, for example) you can produce numbers with linear probability (each equally probable) for:
So, now our lovely, shiny bones can also substitute for our d8, d10, and d12s with other numbers thrown in! 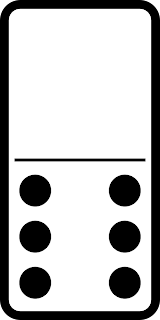 You could also, add zero to all of those ranges by adding the double blank tile. And, technically, you could generate a number from 1-28, but that would require you to assign numbers that don't correspond to the tile faces (the 6-2 stands for 13, etc.) and that would be confusing, require a chart and defeat the whole purpose.

Of course, this is just fun mental exercise, never practical in play except for some kind of limited minigame. But it's that possibility of minigame that's still tickling the back of my brain. I'll try to flesh this out and post something soon.

Along those lines, I read on some forum about Shadowrun (?) using a deck of playing cards to resolve NPC encounter reactions. Is anyone familiar with that? Can you direct me to it on the web anywhere?
Posted by Telecanter at 7:22 AM