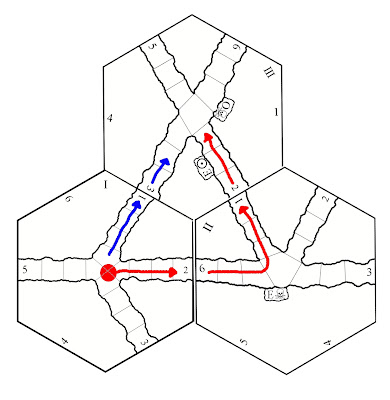 Here is a rough mock-up of how the hexes might work in play. You start at the red spot, maybe you've lowered yourself down a hole on a rope. Now, you can choose one of four directions to travel. You decide to head East. You reach the edge of the tile and need to determine what the next tile will be. So you roll 1d6 for which tile, and get a 2. Then you roll 1d6 for which side of tile two and roll 6. So you spin tile two around until the sixth side aligns with where you're at.

Now as you first enter this tile you take note of the numbers-- leaving side 2 to side 6 gives you 26. Uh oh, the first loculus has a symbol for monster and the "E" means any entrance to this tile with and even number triggers this monster. Your 26 being even, means you've got something to deal with. Maybe it's a skeleton, and you smash it with your trusty club. There is nothing more of note around so you need to decide which direction to go from here. You decide North West.

So, you go through the same process, roll a 3 and a 2 and plop tile three down with it's second side aligned with your passage. (If you had rolled a one here, this would be a dead end) So your number on entering the hex is 12. And that loculus to your left has a gold symbol that triggers on "Even." Sweet, you found some treasure. Maybe it is an ivory teetotum that you hastily put in your bag. You notice the other loculus on this tile only triggers on "Odd," so you dodged a possible encounter here, your 12 doesn't trigger it.

You only trigger the encounters on a tile once, backtracking or circling around doesn't do anything. But imagine, way back on your entry tile rather than heading East, you had decided to head North East. Follow the blue arrows. When you generate the next tile your roll of 3 and 3, results in an identical placement of the same tile. The catacomb map is essentially the same. But because your entry number is 13, odd, you trigger the monster but don't trigger the gold. That's Lady Luck for you.

So it is complicated to devise, but I think once you get it, it would be very quick to play.

There are many things I still need to work out. In making this mock-up, for example, I had to come up with a symbol to represent treasure. A dollar sign wouldn't be appropriate for my European friends. So I settled on Sol just now, but maybe there are better symbols. What about Events, like cave ins, how would you symbolize an event? Also, how many loculi do I want on each hex, how many would be too sterile, how many would be too cluttered?

Once I at least have a solid draft I'm satisfied with. I think it would be cool to implement some kind of website where people could upload their own tile designs. To let you all design tile "decks" to share with each other with CC licenses or something. It's all sort of a dream right now, but one can dream, no?
Posted by Telecanter at 10:49 PM