I'm still working all this stuff out, so it feels odd to share such an early draft of these ideas. But I thought I had better, because without sharing what I'm doing, it would be too easy to put it on the back burner again. 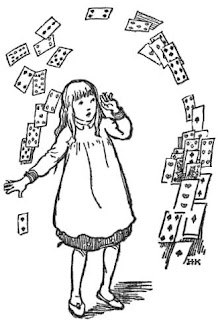 For monsters I envision using a deck of cards. I like the idea of the components necessary for play to be household objects that most people will likely have- six-siders, cards, been recently thinking about dominoes. Also, cards seem to be the component of choice for gaming and you can get decks printed relatively cheaply (my first impression after brief research, anyway).

So cards, but what kind? Doesn't that limit us to 52 monsters? Not necessarily. I love the idea of combining simple parts to derive complexity. So you have something like the hanging man in the Tarot which means something and Death, but when drawn together they have a different meaning. I envision something similar. 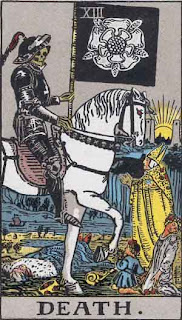 Perhaps on the first level of the catacomb, you will draw one card for a monster and thus can encounter 52 creatures. But on the second level, imagine when a monster is triggered you draw from the deck twice. The first card is the base monster, the second will modify the first. Let's say you draw Skeleton first, which means you'll have to deal with the ubiquitous bony undead, and the second card is Rat. Rat will have the connotation of horde, so it isn't just one skeleton but a whole bunch. If you had drawn the cards in the opposite order: Rat > Skeleton, well the Skeleton card's connotation is . . . well, skeletal. So that would indicate a Skeletal Rat.

If I can come up with 52 monsters that also have reasonable secondary connotations to modify their fellow cards, and if my math is correct, that means we've bumped the number of possible monsters from 52 to 2704. If exploration on a deeper level of the catacomb requires drawing additional cards, say 3, then you pop up the number of possible monsters to 140,608 (is that right!?).

Of course this entails choosing modifiers that can work together and base monsters that can be modified without twisting logic too much. And it entails base monsters that would easily be used as the modifiers, and doing all this without being too bland. Anyway, here are some modifiers from a list I made 11/27/99:
As you can see, some modifiers weaken the base monster, it isn't all about threat inflation. Wouldn't it be cool to encounter a Blind Lich, or something? (well, okay, not a lich if I'm playing solo, but maybe a Blind Rat, haha).

Hmm, even as I write this I'm seeing problems. See, I envision the modifiers to have certain traits associated with them, the way skeletal things are typically considered to take half-damage from all but blunt weapons. But what then is a Skeletal Ghost Rat? If on the third level of the catacombs you draw three cards Rat > Skeleton > Ghost, Wouldn't any typical Ghost modifiers cancel out the skeletal ones, thus making them pointless? I'll have to ponder this.

Another problem: one way to use a deck is to have more cards of a certain type to make them more likely to be encountered. So for example you have 4 Rat cards and 1 Ghost card. Otherwise you have an equal chance of encountering annoyances and killers. So if I want to shape the probabilities of encounters at all, you can throw out the huge number of possible monsters to encounter above, they will be much smaller. Maybe that's okay, though, you don't need a hundred thousand monsters do you?
Posted by Telecanter at 8:34 AM