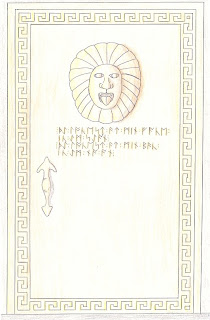 Deciphering this as well as some of my other old runic inscriptions has driven home the idea that runes shifted through time. I'm not sure what version of runic alphabet I originally used, but it seems to be some later Saxon variant. This is an old riddle, but it appears I may have had a Middle English version of it encoded into runes.

Put a mirror up to the lion head and it will roar and open the door.
Posted by Telecanter at 7:30 AM