In Praise of the Vomiter

You can find Zak's creation here. I'm not interested in badass monsters much, seems like the depths of badassery have been thoroughly plumbed (beholder, anyone?). I'm more interested in monsters that perplex players or work on their emotions. Thus my series of Deadly Distractions. I think the vomiter deserves some attention along these lines.

I like the vomiter for several reasons:
The vomiter is reminiscent of the old Alien chest-burster but different in the second two points above. First, you never know what you're going to get (like a really nasty box of chocolates). And second, a person screaming and having chest pains might freak you out and raise the tension level, but someone throwing up in front of you is more likely to elicit sympathy, at least it does for me. Because vomiting isn't usually life-threatening like a heart attack, maybe there is just more emotional space to feel sorry for the individual puking.

So, I wanted to make some creatures that might work similarly, not the surprise so much, I don't think you can top the vomiter there, but the sympathy.

Many players couldn't care less for npc's in trouble, though, so how do we make them care? By putting them in dire need. And so, based on the humble Rat King I give you: 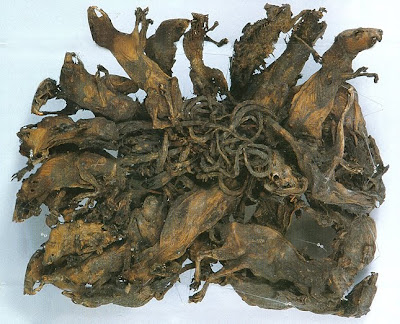 Sometimes known as a Dark Throng, Petitioner's Circle, or just Tom Tangle, this rare mass of humanity is found moving across the countryside at night, or in dark, abandoned places. Formed from what appears to be a circle of men, women, and children with hands fused together, it moves along clumsily, slowly spinning in the direction of travel.

Those bodies closer to the center of the circle have eyes and mouths fused shut. Those on the outside beg for help of anyone in earshot. If a person touches this mass of bodies they must make a save versus petrification or begin fusing to the mass themselves. One limb is quick, the rest following as the hours pass (generally an hour per hit point before complete fusion).

If a person makes their save and resists the fusing, all the bodies not completely fused will be released as well. A person trapped in the Peasant King will know this, will feel the circle's binding strained to the limit. They will also realize that each new person touched gives a chance of release. Stories tell of strong individuals dragging the King from village to village seeking just that. Those viewing the horrific wheel of flesh generally feel differently and flee at its sight.
___________________________________________

So, the idea is one of your players will touch this thing, get caught, and then desperately beg for help knowing just a made save is between them and freedom. The rest of the party will have to decide whther the gamble is worth it, pull out the hacksaws, or just harden their hearts to the begging as the walk away.

p.s. I thought of calling it the Serf King, but every time I thought the name I heard surf guitar. :)
Posted by Telecanter at 1:28 PM