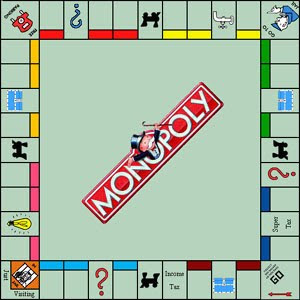 But forget it as a game. It is an abstracted American city most of us are familiar with and have the maps to.

Here are some ideas of what you might do with it:
I think with any possible hack you might also take a piece of paper and map out the center of the board. I don't mean necessarily fleshing out a whole city, but keeping it equally abstract. Maybe a central base for supers, a lake, a big city park, could be there. I also like the idea of tracing out actual courses for the railroads. This central addition could be sketched up quickly, even collaboratively with the players.

So next time you are sitting around with friends and the idea of a city-based game comes up, maybe whip out this old work horse and give it a try.
Posted by Telecanter at 9:43 AM