When last we left our party they had just escaped the salt flats with millions of transparent, moisture seeking frogs. Their magical cart attended by a blind hireling they set off single file into the the red lava rocks of the Broken Lands.

After some travel in the heat the party saw a thin strand of smoke in the sky. Bodabox the elf set out to investigate. On his path toward the smoke he stumbled upon a gaping cave entrance, cool air pouring from the mouth. (The lava tube cave entrances are mostly below surface level and thus hard to see . . . the party could be surrounded by them).

After noting the entrance Bodabox pushed on toward the smoke. He finally came to a small cave entrance surrounded with bits of trash and piles of human feces. He also saw a tower in the distance to the north. Disgusted he made his way back to the party.

After much strategizing the party decided to circle around toward the tower from the east. The vulture still circled ominously above the tower.

After a few minutes of travel what appeared to be mere rocks flicked into motion snapping at Scantilus' porter Afria. It missed. 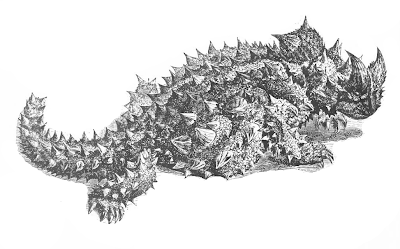 At this point Scantilous started a cautious retreat, Robert son of Robert dropped his battleaxe and took off running and Ehud started flicking darts at the beast (non-plumbata type :).

The terrifed Afria managed to drive one of Ehud's dart deeper and a few more darts and the beast lay dead.

Scantilus had managed to coax Robertsson back to the body. The party began chopping the carcass up for meat when the dark shadow of the huge vulture swooped down to light on the lizard. 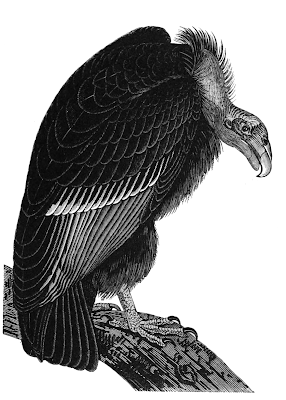 A quick thinking Ehud dropped the great bird with a sleep spell and Robertsson cleaved its head off proudly with his battleaxe.

Bereft of spell, worried about the heat and possible monsters the party decided to send scout around their immediate area for caves. They found one slightly south west. The cave entrance was built up with carved stairs, a brick wall and gutters to direct rain water around the entrance.

Cautiously entering, our intrepid heroes found a rounded tunnel smoothed and carved by intelligent hands with depictions of stylized figures at war and sport. After deciding to set a guard at the side of the tunnel continuing underground the party camped out in the cool of the tunnel.

Some notes, this was my first Skype game. For some reason the technology of it all made me nervous to DM, but after we got going things seemed to be fine. We'd attempted this a while back but had technical problems. But things worked fine this time, my Ubuntu box connecting to ze Bullette's Mac.

The other player was sitting right beside me. Skype worked fairly well, it allowed me to share digital pictures (the giant moloch lizard, for example), but it sometimes seemed like a two way radio; one person has to finish speaking before the next starts. I think part of it is the body language and back channeling we do to facillitate turn-taking are hard to convey through a webcam/limited bandwith protocol.

As far as the game goes, having my map prepared ahead of time really helped me here. I'll post it once these fools are all dead (just kidding!). I was surprised that the lizard didn't take out at least one porter, but I rolled crappy and Ehud's multiple darts helped here.

Now what will happen with these strangely pale warriors?
Posted by Telecanter at 2:16 PM