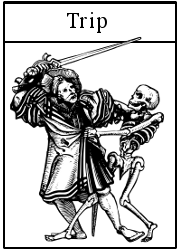 In a true old school combat anything is possible. The actions a player might choose to perform, because they are not described, are infinite.

But what do we do for new players who have no idea what could happen in a combat? Or what will we do in a few years when all those entering the hobby will only have had experience with 4e and most likely be looking for explicit action they can take in a battle?

Make some cards that have some basic maneuvers a player might make. Include simple instructions on them. Better yet if they all had silhouettes illustrating the maneuver being made for easy identification during play. Also, if you could color code different types of maneuvers. Maybe anything that moves an opponent is green, maneuvers that result in a definite combat advantage in red, etc. 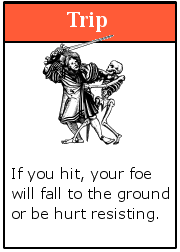 The mechanics you use to determine success are up to you. But for me, I'd use Simple Combat Maneuvers. Every card would have the same mechanic! The idea would be eventually the player would no longer need them-- like training wheels.

So what would be some good cards to have?

Those that Move a FoeThose that Give an Advantage over a Foe
Others
What do you think? Have you had players that might have benefited from something like this? Suggestions for other cards or ways to use them?
Posted by Telecanter at 11:05 AM