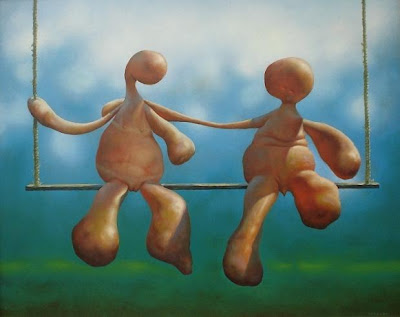 Fleshed out more fully from here. And attempting another frightening, perplexing monster.

Found in tight spaces underground, the only sound they make is the quick inhalation of breath, as if surprised. Some say this is them realizing, over and over, that they live. When encountered by living creatures the unborn, usually in small groups, will approach, mindlessly clubbing with fingerless hands. Cutting their flesh open reveals dry, gristly meat almost like sausage. If they successfully hit a human, that person's mind is transfered into the unborn's body. The human's original body will stare mutely or wander randomly. Scholars say this happens because the unborn have no soul of their own.

A victim newly trapped in an unborn body will find they cannot speak and can only gesture at their allies or attempt to touch their former body to swap their mind back. Tales of doughty fighters butchering unborn often end with the strange fate of the rest of the party-- oddly docile for the rest of their days.

Yeah, the pic has them on a swing (it's unborn recess!), but imagine those bodies crawling toward you in a cave with a two foot ceiling and that noise they make. . .

After posting I'm thinking these guys might be a little too powerful. I might drop damage to 1d4 HD to 1 and maybe even give players a save versus the soul swap, but not sure on the last.
Posted by Telecanter at 5:48 PM