Just a brief note on an idea for an alternate endgame for wizards: hired by a village or town for protection. Talking with my buddy on the drive to the lava beds I thought: in a world that really had mages wouldn't settlements try to secure one for their own protection à la the Magnificent Seven?

Unless the government provides you with some kind of sanctioned magical protection your burgeoning trade town would be ripe for any magic user of about 5th level to walk in and do as they please. 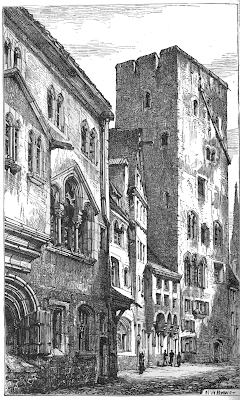 This would probably explore some of the lesser used types of adventure I blogged about here. Why wait for 10th level for a wizard to carve out a place for themselves in the wilderness and build a tower? I understand the tower of their own could be seen as the ultimate prize, but you could still manage that. Have a town offer to build a tower within the town for the wizard, at the wizard's specifications. This would give a party a sort of homebase, a place to store their trophies (also a place they are vulnerable, if they store stuff and leave it could be stolen). But it never is really the wizard's; the aldermen are constantly asking for help, making suggestions and complaints.

A wizard tower around 5th level might be the coolest thing ever and within a level or two still have the wizard desperate to get out of town and build their own tower on some remote crag. "Curse these interruptions and interferences!"

Of course after putting gunslinger in the title of the post I'm thinking of your poor mage with 4 hit points being challenged to a duel each time you enter a populated area. As they gain renown they become the target of fame seekers. Mo' magic, mo' problems.
Posted by Telecanter at 5:55 AM