The meme currently running through the blogoshpere is that all D&D is apocaplyptic; we're all playing Gamma World with fantasy dressing, essentially. While there is some truth to that, and it is can be very useful for play, as usual it works best if you focus on roleplaying's swords and sorcery roots and squint away everything else.

So, just to be a contra voice and say D&D doesn't have to be apocalyptic, I give you a one word rebuttal: 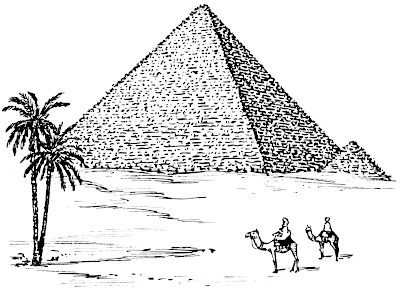 If there is anywhere on earth today that you might come close to simulating D&D in real life it's a place like the Valley of the Kings in Egypt: find an un-looted tomb, break in, and gather the glittering treasures. And this is because the pyramids, the Valley of the Kings, and the rest of the sites in Egypt are the remnants of an invoked devastation . . . umm, nope.

D&D doesn't have to be about Atlantis, or Lemuria, or the Suel Empire. D&D is as much about history as it is about fantasy and has to be apocalyptic only in the sense that time is apocalyptic, that all history, with its genocides, wars, and plagues is apocalyptic. The long forgotten empires of Medieval Europe, those that provided it its scholarly language, its texts, its science, and myth, were not sunk into the sea, but declined over centuries.

Maybe this is more apparent to me living on the West Coast of America, where 100 year old buildings are ancient wonders, but the world is littered with the remnants of past peoples and they weren't all nuked.

So, history . . . but empires fallen in apocalypse is actually useful in a game setting because it can provide both powerful artifacts and the reasons they can't be created anymore making them rare and desirable. But let me go back to another source of D&D's inspiration and give you an alternative: 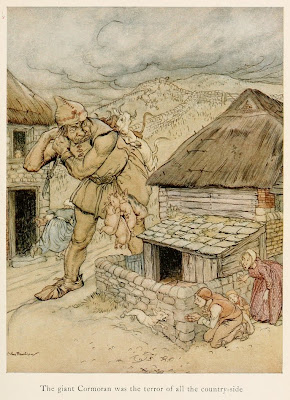 I would say that Jack the Giant Killer is as much an inspiration for D&D as Elric or Conan ever were. And where did Jack get those beans? Not Lemurian super science. How about the mill that grinds out what you wish, the seven league boots, the tinder box that summons magical dogs?

Where did they come from? To know would be to lose some of the wonder. So, in the end why make this post at all? Because, while it can work and work well, if you think of all D&D as apocalyptic, it seems you are pushed as DM to explain the apocalypse and know the origin of each relic. But I don't think this is necessary; below lies the mythic underworld and the items there can give you your heart's desire if you are cautious and not greedy. That's enough.
Posted by Telecanter at 7:36 AM