A while back I posted a way to trace your dice to make a quick, random, but semi-realistic dungeon. That technique is more suitable for caves and caverns, though, because there's no rhyme or reason, just random placement. And dungeons made by sentient creatures, even if centuries decayed, presumably had some reasons behind why they were made.

So I wanted to make a way to quickly and easily generate dungeons that were man made, or at least made.

Two possible ways to approach this are Greywulf's Sudoku Dungeons and Zak's way to use tarot cards to make a more grid like dungeon. Here's my take using dominoes:
Face numbers mean:

Pretty simple. There is some fuzziness in there as with most simple rules, but the idea, as always is to push you to come up with creative interpretations that you might not normally. Step number three in the directions tends to push rooms away from each other and towards the periphery but they will still be connected via various passageways. Also, because we are connecting numbers, complexes of like-purposed rooms tend to form.

Let me walk you through an example:I randomly pick 12 bones (I have a set of travel dominoes that makes them easier to use in a small space, and I shake them up in a bag). 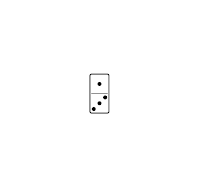 The first of the twelve I flip over to reveal the 1-3. Place it in the center. 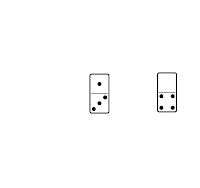 Next come a 0-4. Uh oh, what to do with that. We'll just put it off to the side for now hoping it will link up somehow later. 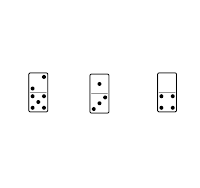 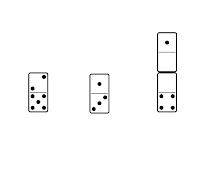 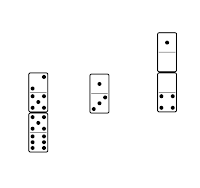 With the 5-6 our other side gets a little love. 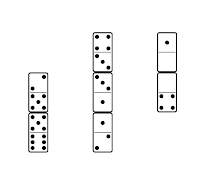 The 1-2 and 3-4 are pretty straightforward so I'll just show this pic after both are placed. 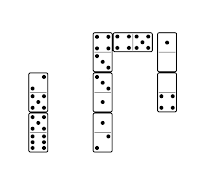 With the 4-5 we see the first invocation of rule #4 (otherwise we'd have a bunch of cruciform random dungeons) and because the 5 face is higher than the connecting face we turn it to the right. You can move your side dominoes farther out to make for islands of rooms in a big megdungeon (presumably connected vertically or magically) or you can smoosh them together as I did here, which is nice because it moves away from strictly rule based connections. 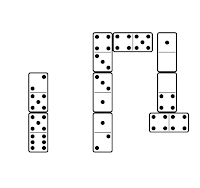 I place doubles horizontal and tend to think of them as the largest and most impressive of their type. 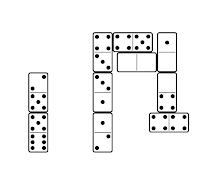 This poses one of the fuzzy problems I mentioned above, where to put the 0-0? But I wouldn't think to hard about it, any of the 6 possible placements I can think of are going to result in an impressive chasm, so I just placed it to the left. 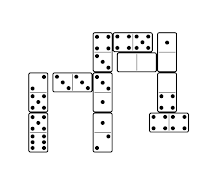 Likewise with the 3-3. I suppose I'm defaulting to try to link up our orphan tiles. 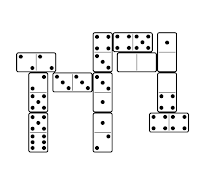 And our last bone is another double.

Okay, now what do we make of this? Well, water next to a chasm seems a natural for a waterfall. And water separating rooms seems a cool place to put boats or a ferry. Here's a humble map I made of our domino dungeon: 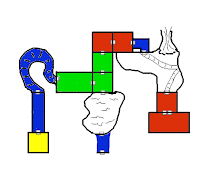 I said I thought of doubles as an impressive incarnation of their type, so I thought our double 2 might be a massive, grand stairway. One of the limitations with this system
is that it doesn't deal with variations in depth, so if our interpretations can add those all the better.

For storage/commercial (green) my thinking is that it can be anything from mines to mushroom farms to mundane storage rooms. Because the double 3 is connected to the grand stair, it probably isn't a mine-- unless the mine uncovered the stair?! It could also be an ancient chamber relegated to storage by new inhabitants.

I would probably say the entrance is the little bit of corridor (blue) and that players will need to cross an underground lake where they will have to decide to go left or right.

The double 4 could be a throne room. I put a pair of rope bridges across the great chasm et voilà we have a dungeon. It seems a lot here, but you can generate these things in about 2 minutes.

Hope this is useful. Let me know if you have any ideas to improve the process.
Posted by Telecanter at 10:00 AM