Want to make a dungeon with me?  I'll show you a method that is quick and easy and yet still a good stand in for natural caverns.  If you get tripped up on your own perfectionism or are just too tired from work to make a dungeon come game night, this is dedicated to you.  I'll break this up into several posts because blogging about the process actually takes longer than using it.  So, today we'll just do the map.

Get 12 dice of various shapes.  Make about half of them visually distinguishable from the rest.  I chose dark and light:

Toss the dice on the paper.  If  some roll off the paper just move them back to the closest edge: 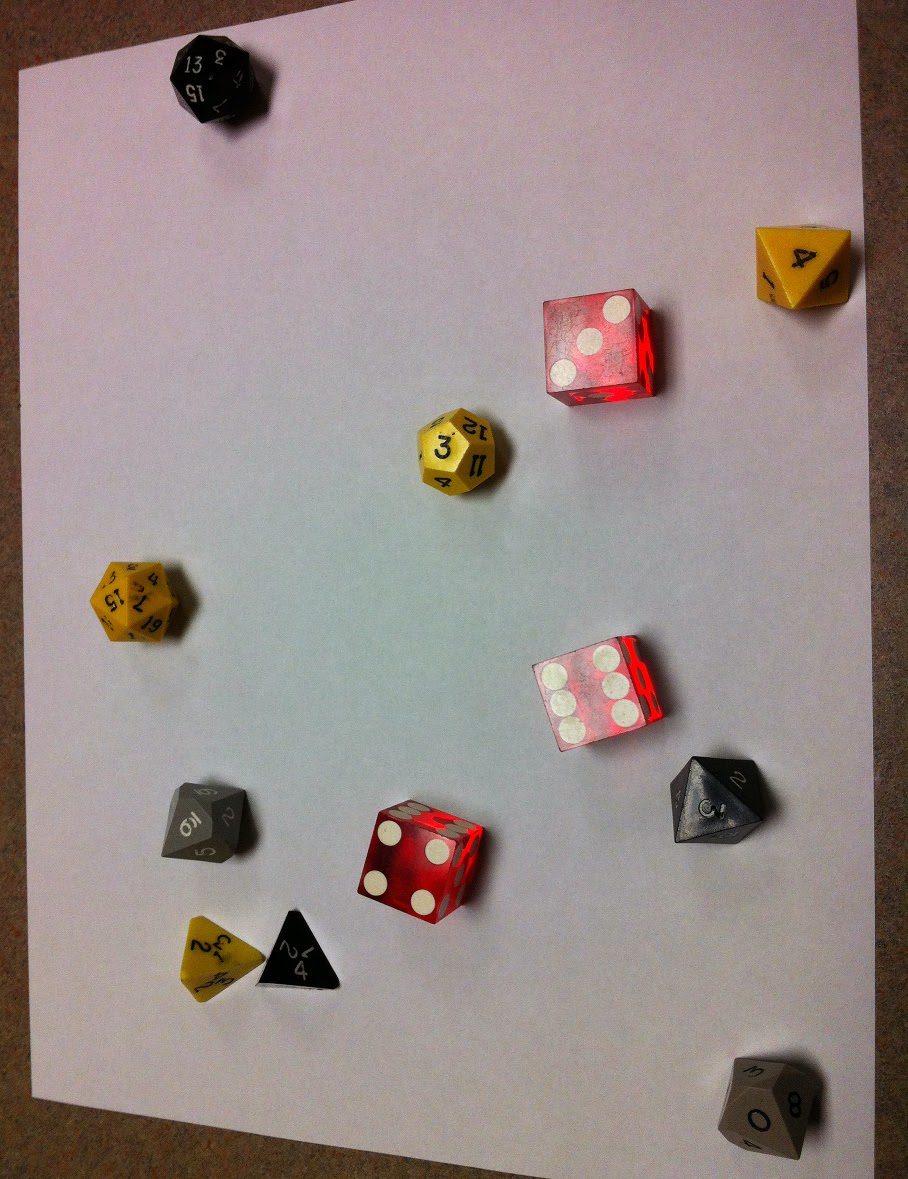 I use blank paper but if you feel more comfortable using graph paper go right ahead.

Now trace the dice in pencil as you remove them and write down the number they rolled.  Light, sloppy, and fast is good.  If several dice clump together, trace around all of them like its one lumpy room.  Also put a little dot for the dark dice: 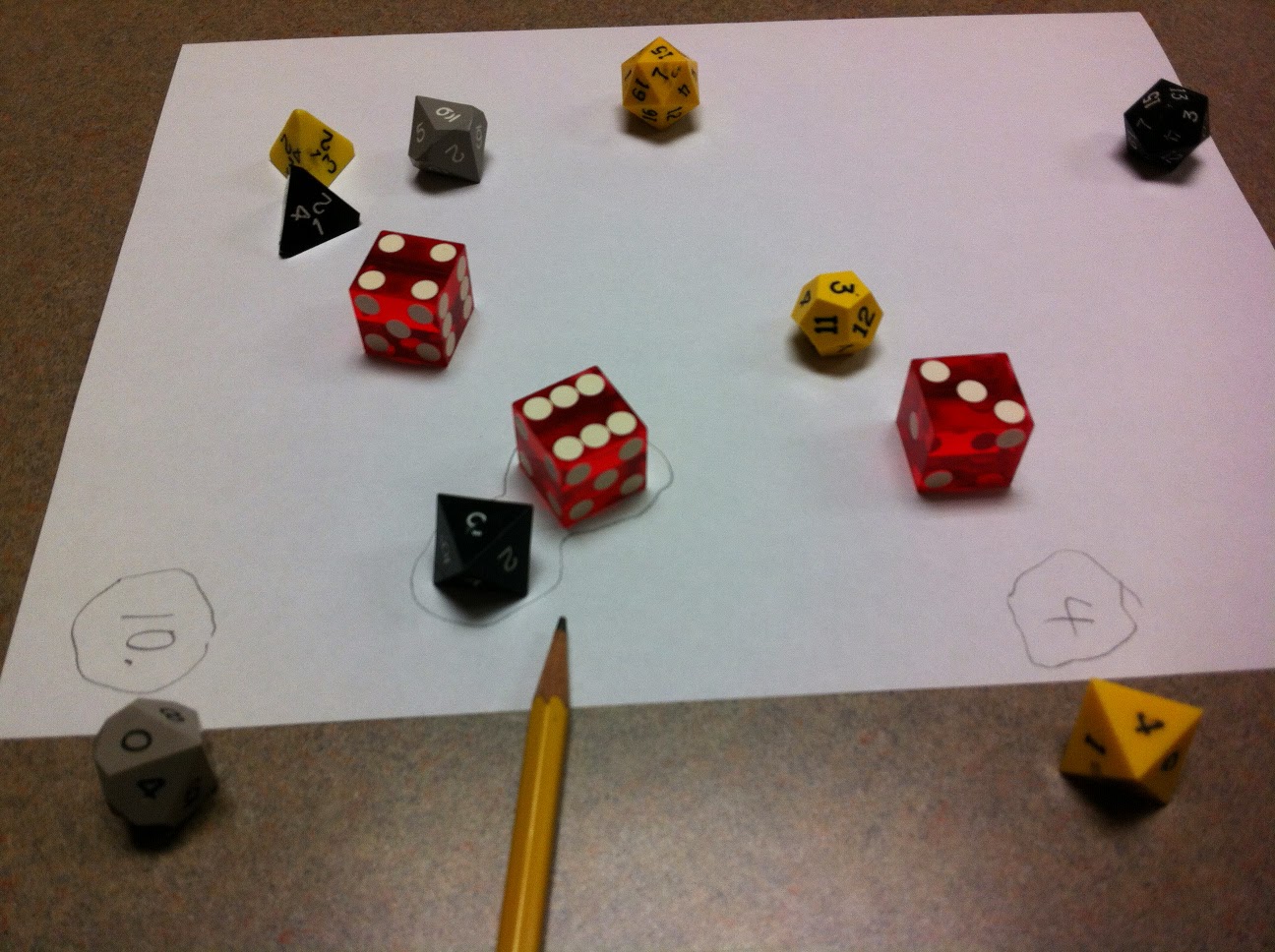 Now, draw connections from odd numbers to odd and from even numbers to even.  Not all of them have to connect but try to avoid a a simple circle. or completely linear arrangement: 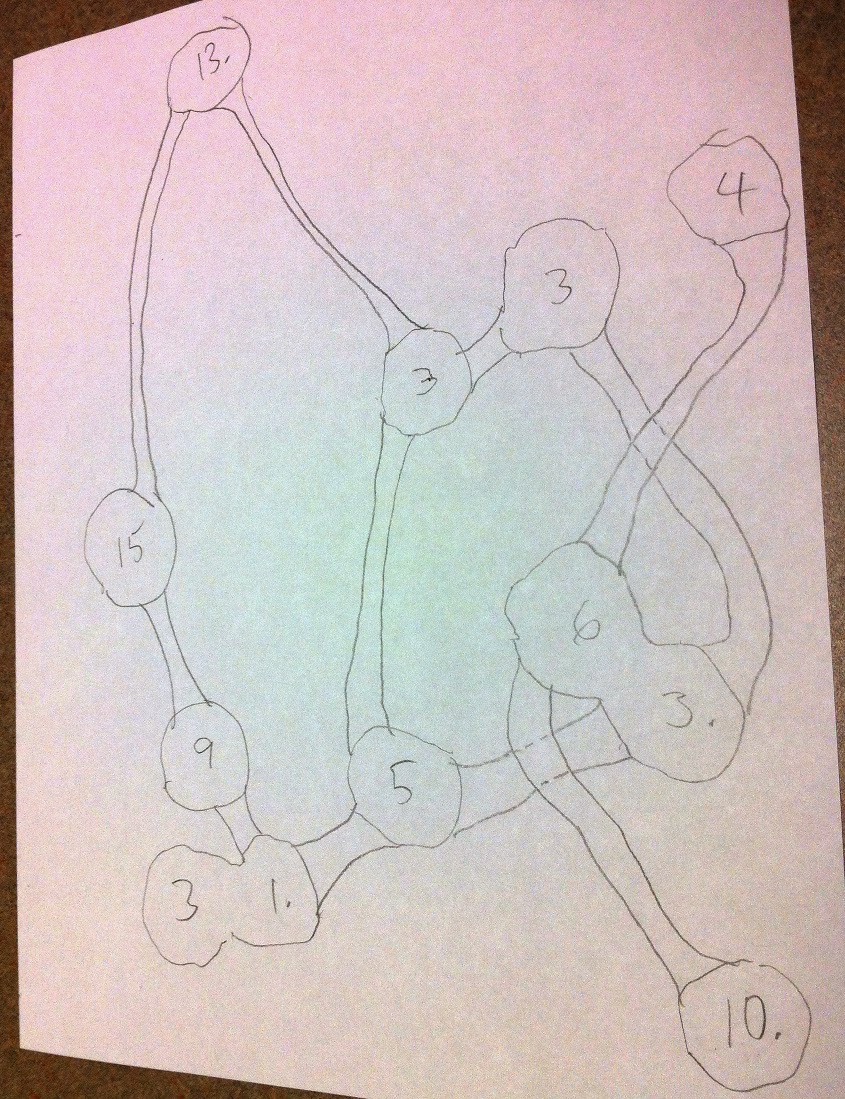 If there is no connection between the even and odd caverns you'll need to arbitrarily make one. (luckily, our clumpy room connects the 3 even elevation rooms here.)

Now, clean up the connecting passages and draw little curved lines to indicate differences in elevation.  I draw them like little steps leading from the lower areas to the higher, each indicating a rise of 10'.  If a difference is too much, make it a sharp cliff: 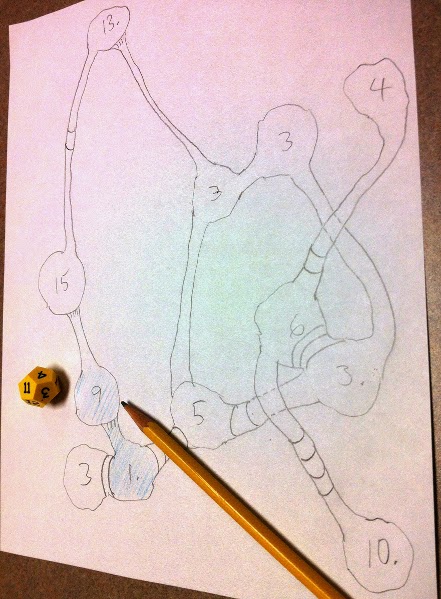 Now, those dotted areas where the dark dice fell are "Fat Man's Misery" type passages, they're passable, but just barely.  Characters will either have to crawl on their bellies, or sidle along sideways. The chambers can be very low-ceilinged or choked with stalagmites. (I decided to make the passage from the elevation 3 room to elevation 13 very narrow, and make the 1, 3, 10 elevation rooms with dots have low ceilings)

One last thing.  If we roll a 12 sider and just count clockwise (roughly) to pick a room, we can place a water source and see what it does.  If there are lower elevations nearby, let it flow along.  If not, it can be a pool, or you can disregard- not every cave has to have water.

The largest numbers are the exits to the surface. So, here the 15 and 13 have entrances from surface caves or sinkholes.

Now we have some treacherous terrain to explore: narrow passages, long drops (one 60', one 100'), and even a dry cave hidden by a nearly impassable underwater one.  Next we'll place some monsters.
Posted by Telecanter at 11:49 AM