I mentioned in this post that I could use the behavior categories also as a kind of template, so, as a base, vermin have giant rats stats by default, and then I can differentiate them from there.  I've been thinking since that post about about how to do this.

Someone might call this "fluff" but, to me, this is where much of the game lies.  If I can freak out my friends just by describing what is slithering towards them, I'm happy.  Also, just mechanically, there isn't much range of damage or hit dice you can give creatures and keep them within the same dangerousness.  I mean, start giving giant rats 2 HD and they are no longer vermin, they start functioning as some other kind of dungeon monster.  So, in the end, a lot of creatures, unless you've given them a cool special ability, will be palette swaps for previously encountered creatures.

Anyway, on to what I came up with.  I started by trying to come up with a list of adjectives that might describe what I consider creepy or verminous.  I made a chart.  Then I thought it might be simpler and more strightforward to just combine creepy critters, so I made a second chart.  I'll show you that second one first because I don't think it works as well:

You can see above that I tried a second draft of this chart.  I cut bat and leech, because mouse/pigeon in my mind is much like a bat, and worm and leech seemed too close as well.

Again, I still didn't like the results much; how much different from a centipede is a worm/centipede or a maggot/centipede for that matter.  I think the problem is that too many characteristics that ick us out are packaged into each verminous thing and we need to tease some of them out to get more possible, and novel, combinations.

I think now, that a way to fix this might be to have the creepy stuff in one column and then fuzzy-pet stuff in the other (you could get like maggot-kitten hybrids, ick) Anyway, I just wanted to share it with you so you could see my process.  So, now back to the first attempt I mentioned: 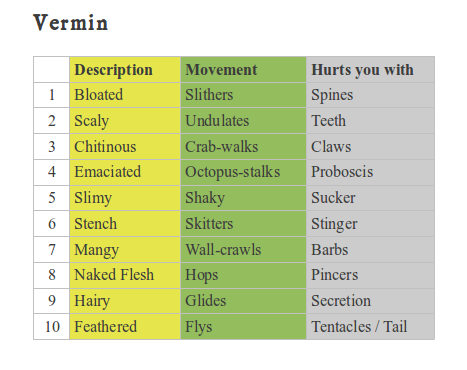 I'm thinking now another possible column would be to add a "target," because an easy avenue to body horror is to tell you the thing is crawling toward your ear or burrowing into your armpit.

8, 9 , 2
Naked skin, it glides, and has teeth, okay maybe flying cave squirrels.  Or to try and get weirder, hairless Chihuahuas that bark continuously and glide at you with little needle teeth.

8, 8, 4
Okay that's kind of gross, it looks like a hairless hamster with a long proboscis and it will hop suddenly and try to plunge it into you and suck your juices.

2, 5, 6
This is scaly like a small lizard and it moves on shaky legs like it is sick or dying but it has a stinger on its belly.

5, 5, 3
This is slimy and shaky, sound like a newborn.  So, maybe this looks like a newborn puppy that shakily approaches with eyes closed and then pounces with sharp claws.

Not too bad.  I might use some of those.  One of my players is a dog groomer and I think having new-born puppy-things following her around the dungeon trying to do her harm might freak her out.

It doesn't completely solve my problem because I have scavengers and pack creatures to worry about too, but it's a start.
Posted by Telecanter at 8:20 PM