So I blogged here and here about wanting to have a simple system to help with how creatures will act when they become hostile, but I realized that I was trying to solve another problem as well.  I most often run small dungeons and trying to come up with wandering monsters is always tough for me.  Sure, you can come up with a cool showcase monster, but a dungeon needs a whole array of possible creatures to encounter.  And, come the end of the week my tired brain has always struggled with that.

With the creature behaviors as a starting point I can, hopefully, more easily flesh out the ecosystem of each new dungeon.  If the dungeon is submerged, for instance, the vermin can be little crab-things, and I'll up their AC.  If the dungeon is a sewer under a urban area, I can have down-and-out humans act with the behaviors of creatures: scavengers and vermin.  Or I can just palette swap -- these vermin are worms not rats-- or riff, these spiders act like slavers, these termites are soldiers with different castes.  Etc.

Another thing I want to address is the method I've been using to keep track of wandering encounters.   What I've done for a quite a while is, for each dungeon, make little booklets made with the cool telemonster tool Jensan made.  But I've found the little booklets fiddly in play and hard to store along with their dungeons because they aren't a flat piece of paper.  I'd like a single, letter-size piece of paper that I can fold in half.  That way, with a single-sheet map, and the encounters I can walk around DMing with two sheets of paper.

Here is a form I've been working on to help with both of these issues at the table.  I'm not done yet, but the idea is you pencil in whatever adjustments you want to make to the standard monster type (I'll probably add standard HD and dmg values), generate a few encounters worth, and then draw the hit points of these in boxes on the graph paper (a great trick I got from ZakS). 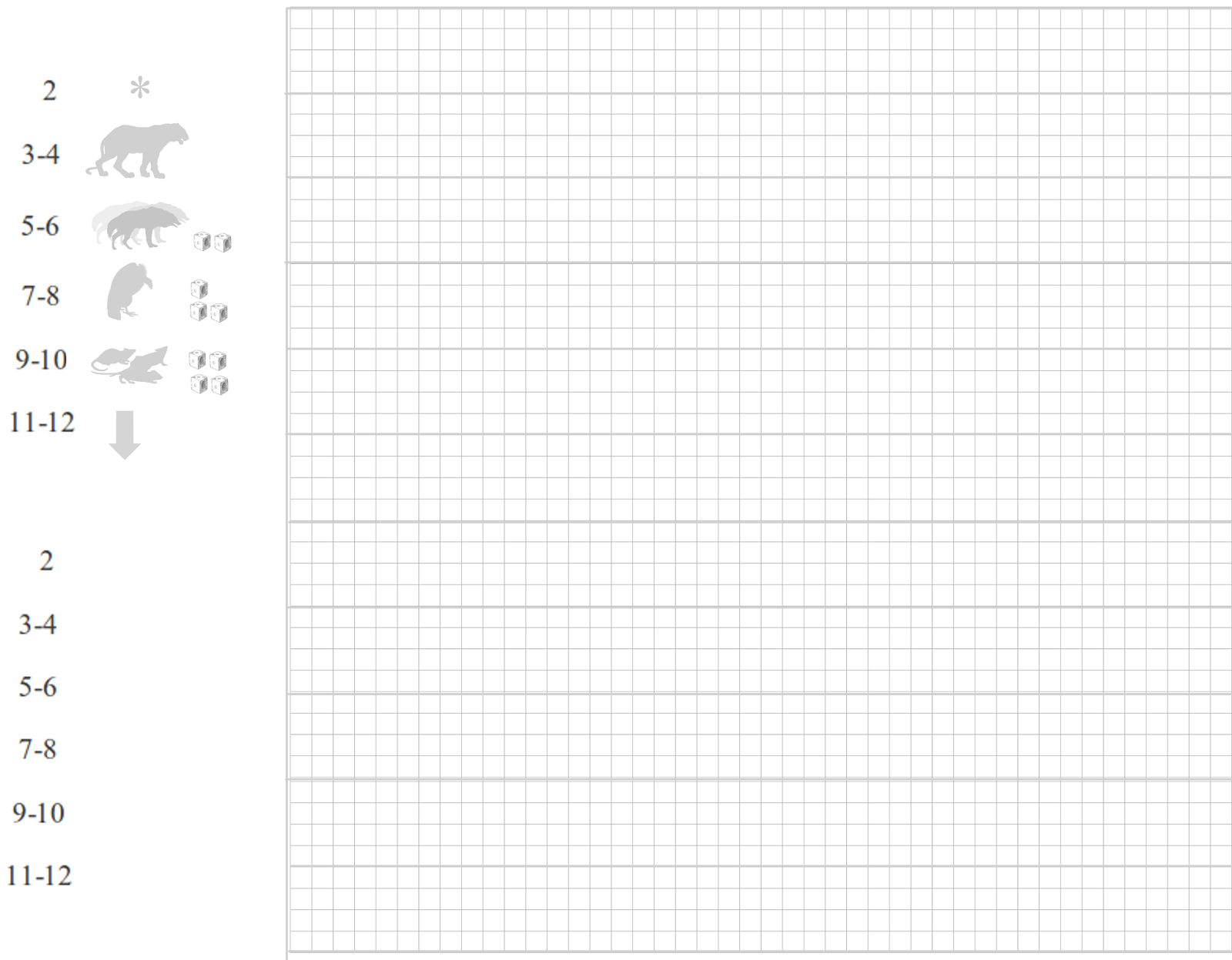 I've simplified the encounter results roll to 2 and increments of two from there, to try to help me memorize this and do things quicker at the table.  If I remember correctly this will make packs and scavengers more likely to show up than vermin, which makes some sense to me.

The asterisk could be the cool showpiece monster.  It will also most likely be placed in a specific location, but this would mean you encounter it outside of there.  Or, heck, the asterisk can just be overtly aggressive things like zombies or rabid bears.

I mentioned in the last post that the number appearing will be important.  I thought about it a lot and I think, with my play groups of around 4-6 people that sometimes have hirelings, 2d6 for packs, 3d6 for scavengers and 4d6 for vermin should work okay.  With the understanding that packs get overtly aggressive when they are twice as many as the party, scavengers when they are triple, and vermin quadruple the party number.  I'm going for simplicity and the ability to easily recall these.

The way I have the table set up in this draft, a result of 11 or 12 would bump you to the second table of intelligent opponents.  That would make them pretty unlikely to be encountered.  But, I can flip those tables and have some locations far less likely to have wild creatures wandering around.  Which makes sense, because the cult temple guards would probably want to deal with roving packs of predators.

I'll try it out, next dungeon I run.
Posted by Telecanter at 9:42 AM