Thoughts on a Design Example

Jez Gordon recently started up a discussion about design in rpgs by posting this image to G+ as an example of a game doing it right: 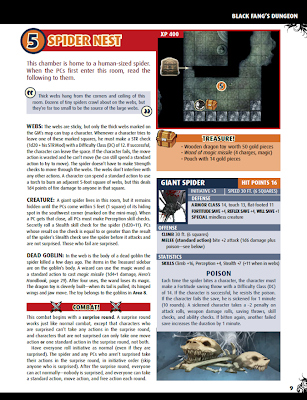 It's from the Pathfinder Beginner Box sample adventure.   I love this kind of stuff and wanted to share some thoughts.  I don't own any Pathfinder products and haven't seen this image before so I'm a good proxy for an experienced gamer trying to digest the info here.

I was going to put notes on the image, but thought better of it because I want you to see the original uncluttered.  So, I'll just walk through as my eye travels or paragraph by paragraph.

The first things I notice are the big black border, the red bar with big number and title, and the two column layout with map inset and text.   I follow what these divisions mean.  I'm hoping the black border denotes a section of a rulebook and isn't just the border all game books seem to include.  I don't know what those standard borders are for but to say "this isn't a readin' book, this is a gamin' book" or something.  I'll give this page the benefit of the doubt and imagine this will help me quickly navigate to the sample dungeon section of a bigger book.  I can easily tell that each dungeon room/section will be getting its own write up with a smaller map.  I imagine that somewhere else there is a larger map that shows the spatial relationship between all these rooms.

This is the fifth room and a spider nest.  This room is worth 400xp, though that seems like information I don't need here, not yet.  The red text is apparently meant to be meta text, aimed directly to the DM reader.  It tells me there is a spider in the room, which I knew from the room name, although new information is that there is only 1 and its size is about that of a human.  Then a direction to read a quote to players.  Okay, that tells this is not meant to just prep me for a game, but to be used while DMing the game.  That's cool.  I like that I can see ahead that the stats for the monster in the room are on this page because I know I'll need that.  But if I'm using this in play I'm wishing I had a map of the entire dungeon visible.  I mean there appear to be two exits from here.  Do they lead to room 4 and room 6?  I suppose that works if the dungeon is linear.  But this set up wouldn't work well if there were stairs or the nearby rooms were not adjacent physical pages in the book (like if the right passage goes to room #12, left passage room #1).

The quote feels odd to me.  I play with lots of non-gamers, brand new to our game and everyone knows webs mean spiders.  And they all know webs probably mean big spiders.  It feels like this is aimed toward standardization more than helping a new DM, that it is important all parties entering hear the same info.  But this reminds me of discussion about room descriptions that happened a while back I know Courtney of Hack n Slash was involved.  When I describe a room to players there are certain things I let them know: Room size, exits, things that stand out.  So if this quote is meant to teach a new DM what players will notice first in a room, it isn't doing a great job.  Looking ahead I see there is a dead goblin which is cool because corpses are signs of immediate danger even to new players.  But why isn't that sooner?  Will they only find the corpse by digging in the webs?  But then wanting to check the corpse is a great bit of bait to draw them in and have them distracted when the spider pops out.  Why not mention it sooner?  If the quote is meant to help the new DM convey information I would suggest something more like this:


"This is a large rectangular room filled with webs.  You see a little body laying on the floor near the center and what looks like a passage leading out the other side."


I would also say, if the quote is meant to help a new DM know what information is important to give to players then, explicitly point that out to them.  Something like "Make sure to let players know the general dimensions, exits, and focal details of a room first.  Then you can always add more details as they ask questions."  But, this book might do that on an earlier room since we are seeing the 5th.

Next we see some sections with headers.  The webs, the creature, the dead goblin.  There is a lot of information in here that I think anyone would know: "webs are sticky" or don't need to know "the spider killed the goblin a few days ago."  I mean I suppose the latter could be important in signifying there is still an active threat here, this isn't an ancient skeleton.  But players will know that from the description of the corpse.  You could amend my quote above to say "a bloated little body."  And again, if this is meant not just to smoothly run a dungeon but to teach about running a dungeon why not point out why the corpse is even here?  It could be a single sentence about corpses as a good way to signpost hidden dangers.

The whole web section seems weird to me.  No one is going to walk into webs on purpose.  The webs don't cover the room.  So, why spend so much priority space describing what happens to players in the webs?  Perhaps pathfinder combat rules, similar to 4e, include sliding and pushing and players will inevitably end up in the webs once combat starts?  What would be cool is if the spider lays down webs to catch players, but I looked ahead and that doesn't seem to be the case.  If this were a room I was running with my simple rules getting caught in a web would merit a footnote, something at the bottom of the page.  Unless I put the little bloated corpse within webs.  That would be an interesting choice for players: "if you want to investigate the corpse you'll have to wade into the webs a few feet.  It does look like it has jewelry."  And again, if that is the case, point it out to the new DM, "this is meant to be a choice for players, dungeon set ups that present tough choices are always interesting."

Next comes the Spider Section.  This all seems well enough, but more important than the webs.  Skipping ahead I see the combat subsection though and I get a bit confused why in the world you would separate that with the dead goblin!?  The spider section tells you how to check if players are surprised, the combat section tells you what it means if they are surprised.  I feel like these bits are much more closely related to each other than the layout portrays.

I see now that this whole room might be meant to teach how to handle surprise.  So my bit up above about teaching how to describe a room, signpost danger, or offer choices could be considered distractions.  Even so, if this spider is the stealthy monster in the dungeon meant to teach how to handle that kind of creature, why not say so?  It could be a single sentence "When players see the webs they will expect a spider and be looking for it.  How do we determine if they see it or not?  That's where stealth rolls come into play . . ."  Some of this explanation might have been done in the rules section on perception checks or stealth.  But if you are using this as the first actual in-game use it would probably be good to tie back to that.  Something like "this room is a perfect spot to see how stealthy creatures that attack from hiding work (see page 12)."  Maybe not.  You might want to just get the new DM playing and then have an afterward that touches on some of these things.  But the way the combat section is set off and focuses on surprise it seems like the authors wanted it to be a teaching moment.

This is running long and I need to get to work but I don't want to split this into two parts, let me try to speed up a bit.

The blown up image of a door(?) on the map is odd.  Why isn't it clear from the map itself that it is a door?  Is there no master key somewhere?  It seems silly to have so much color and digital texture to the map inset and not be able to convey a door.  Also, I'm biased here, but I could not recognize the spider on the map as a spider I think an image that showed more legs would work better, though using the same image on map and next to the creature's stats is a good and necessary design choice.

Treasure is given before the monster.  Again, seems like that along with the xp given earlier should be the last thing on the page.

That statblock is overly messy though.  Two units are given for distance!  If you are going to have a game that uses squares in combat, why not embrace the advantage of using squares as a simple unit?  which of these data points are most important?  Hit points are a different color but sort of shuffled off to the side, I didn't notice them at first.  It seems like from the rest of the page, the first thing we are going to need is the stealth score.  So why is that given the same prominence as the climb skill?  I know the stealth skill was given back in the creature section, but it is harder to find within all the text.  Also there is new info here in the statblock: that score is only when it's in webs.  That makes me wonder, does this mindless creature have some strategy?  Will it always try to stay in webs once combat begins?  I don't want a whole page on spider strategies, but it might be good to have something.  I'm imagining the first thing my players do would be to light the webs on fire, and if it's strategy is to fight from webs this might be a very brief combat.

There is a whole section on poison here and my mind puts on the brakes.  Wait a minute, is this the first creature that uses poison in the dungeon?  If this room is meant to teach how to handle stealthy creatures is dealing with poison going to complicate things?  If the dungeon were more old school with save or die poison I think some discussion of that would be warranted.  Though looking at the fiddly way poison is handled here it might warrant some discussion of how to keep track of it all anyway.

Finally, a picture of two skulls.  Are those kobolds?  I don't see why this is here.  I'd probably cut it, move the treasure section down here and make the map image bigger.

Anyway, those are some of my raw thoughts as I looked through this page.  Thanks to Jez for sharing it as an example that the community can discuss.  I like a lot of what it is trying to do with the single creature, simple map inset, and single room focus.  I think it could be revised to do that even better.  But I'd be interested to hear from all of you.
Posted by Telecanter at 9:39 AM