I had a session on Saturday with two returning players and two players I'd never met.  My buddy told me that when one of these new folks heard he knew of a DM he got really excited and wanted to set up a game asap.

In prepping for that game I looked back through my handouts, some of which haven't changed in years, and re-organized if not revised them.  I thought I would share them with you.

First, there is no perfect character sheet.  Or, the perfect character sheet is probably just an index card players can record info on.  Well, as long as there are a small enough number of players that a DM can tell them what they need to record and what it all means.  But, because you never know how loud it will be or how many questions players might have, you try to design a sheet to convey some information.  I have a fancy character sheet but for new players I figured it would make more sense to use my older, simpler sheet: 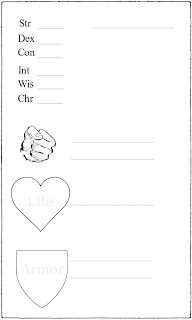 You can tell by the size of things that the two most important datapoints for my game are your Life (hp) and your Armor (ac).  You'll also not there isn't even a place to write down xp or money.  This sheet is saying "umm, let's see if you survive this one shot before you get too attached."  Probably the most complicated part is the back: 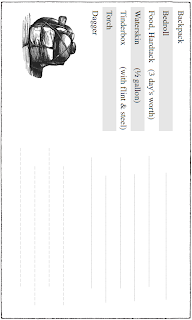 I've found the single biggest consumer of time in character creation is shopping for gear, so I just wave my mighty DM hand and say you have all this gear already.  I do look longingly at some of the more random quick kit style systems that give each player different things they can work with, but the coolness of players having different toys hasn't outweighed for me the complexity it adds and the extra prep work (I'd need to print, cut out, and keep straight all those different kits).

Here is a pdf of these in case you want to try them out.

To allow for a little choice I then give them this sheet: 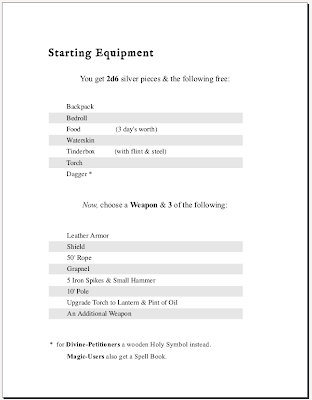 Ideally, this would be in a booklet I would hand to players.  I had one years ago (this page is actually formatted with big margins because it was in a digest sized booklet), but the last few years I've been spending more time with the same players who have survived the brutal early game and so i need character creation documents less often.

Because leather armor and a shield is a choice, everyone but magic-users pick them.  There is usually some group banter about what their third choice will be; who will get rope and who will get spikes etc.

It does say choose a weapon and so I show them this sheet: 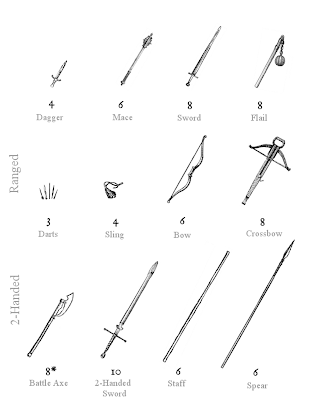 This is something I've revised several times.  I am really drawn not just to simplify by reducing the number of weapons available, but to make the ones available unique.  In other words if all weapons just do damage, then why not select the one that does the most?  Using the "shields shall be splintered" rule really gives single-handed weapons an attraction over more damaging two-handers.  I'm also still using the "godly people can't use sharp weapons" weird original rule so that gives blunts a reason to exist.  I have some notions for further differentiation.

I understand the impulse of the DM that says "hey if you want to have a bardiche, so be it, whatever you want," I just think that if the kind of weapon they have matters so little mechanically in the game you are actually depriving them of more than you are giving them by letting them play the warrior they imagine in their head.  I also understand the allure of "all weapons do d6 damage," but that is just a bit too abstract for me.  I think limiting things to, at most, 4 damage categories is simple enough for most new players.  Anyway, it's definitely still a work in progress.

You may notice my starting equipment sheet has a place to roll for money yet nothing to buy, but after character creation I let folks have a chance to hire hirelings.  I still use the system from this post.  It needs to be revised seeing as it has armor and weapons available to hirelings that are more 1e equivalents than my own system (no ringmail, for instance).  And we always roll up traits using this chart. Here is the sheet I give them to record their hireling info: 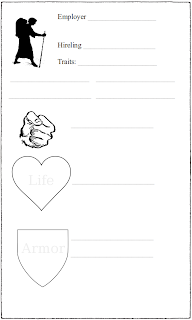 And the back doesn't have gear but just space to record what they will carry for you: 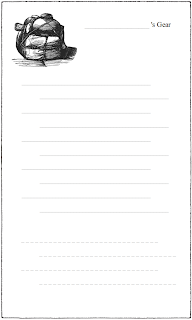 Here is a pdf.

Finally, clerics in my games use a different system of asking for miracles.  Here is the latest handout I use to help them track that: 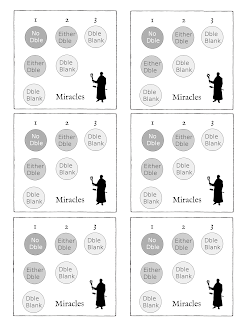 Players get three glass beads to place where they want, the circles tell them what domino they need to draw from a pool to be successful.

I also have a page of spells for magic users that I haven't changed and a small booklet of possible miracles clerics can ask for which I can never find so I'm linking it here.

What else?  I decided not to let players roll for mental powers this time to keep things streamlined, but that is something I let folks do when they are more experienced with my game.

And Ihave a chart of player relationships that I edited down from one of B/X Blackrazors.  It's okay, I would like to revise that eventually too, though.  Anyway, that is all the documents I use in creating new characters in my games.
And that pretty much sums up what I need for character creation in my game.
Posted by Telecanter at 11:56 AM