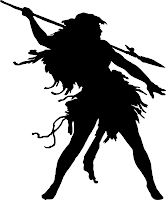 This silhouette of a powerful, savage woman is from this cover:

While the Burroughs text from 1908 is in the public domain, the Roy Krenkel cover is from 1961.

The problem is Krenkel died in 1983.  You can't ask permission to use this and you can't give him any money.  Maybe his kids have set up some kind of foundation to license art.  Maybe a silhouette is considered transformative and thus a new work you could use without permission.  But I wouldn't bet on it.

Looking here, if 1961 was the first publication of this image (let's assume yes) then it would enter the public domain after 28 years, or 1989.  But, if the copyright was renewed it won't be in the public domain until 2056.

I'm willing to wager I'll be dead by then.  Someone could have been born on the day of Krenkel's death and die of old age before they could use his art for anything.  Insane.

Anyway, I'll let you decide if you feel safe using this or not and gamble that my using it to illustrate the absurdity of American copyright length falls under Fair Use (probably doesn't).
Posted by Telecanter at 4:14 PM