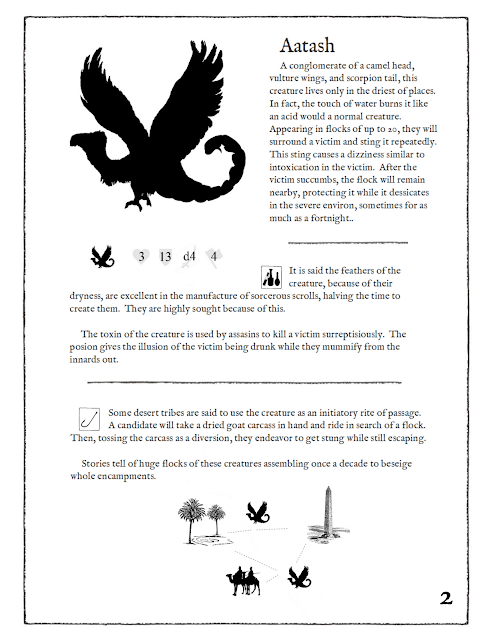 My last post was really about quick look ups at the table and using silhouettes to speed up the process of finding the right monster.  I realize that many monsters would benefit from more info in a prep-type book.  Here is a mock up of me trying to see what that could look like. Imagine the big silhouette replaced by an actual cool illustration.

I envision this and the other to be completely different books.  This one could be a bigger format.

I don't see the perfect Monster Manual as one of those comprehensive tomes with an entry for everything.  I think most monsters could be easily handled by a short section with one example monster for each hit die and example special attacks allowing DMs to extrapolate and mix and match.  Only weirdly interesting or complex monsters would get full write ups (I'm not claiming this is a great example of that-- think Man of Wounds, or Vomiter type stuff).

So, this page is still busier than I would like.  Maybe being in columns would help that.

In thinking of its use for prep work, I broke it into explicit sections with: the overview, what you can use this thing's body parts for, adventure hooks, and a map.

I should have probably put a size comparison like you mentioned, but forgot about it while fighting to make this much happen.  A good place for that would probably be in the lower outer corner, then as you flip the pages of your book you can see the little sils at the bottom or the monster name at the top edge of the page (thinking of this as a left-handed page, consider the illo and name to be switched for the opposite side).

I did get a Morale underlay thingy-- the flag.  I was also thinking about a second line of smaller numbers under the  creatures stat line.  The idea with the stat line look is that you will easily recognize this beastie in your at-the-table-book because it's the same.

I'm torn between the idea of the text being in character as a kind of bestiary that you could easily share with your players and a DM aimed text with a clear voice and practical tips "My players farmed these for their feathers until one of the huge flocks almost TPKed the party, now they respect them," or whatever an experienced DM would think another DM should know.

Some things I know I don't want: glossy paper, a watermark underlying the text and making it hard to read, and probably too much in-character text-- I don't want short stories, just text that sets a tone and is evocative.

Fonts!
Jacob over at Swordfish Islands tipped me off to some interesting free fonts he mentions in this post.  That's Fell's English Roman in the draft above.  I like that it has more character than Times New Roman, which can seem pretty sterile after a while.

The fonts are free and only require you attribute them and if you redistribute, keep them bundled.  If you know of similarly cool fonts let everyone know.  Thanks Jacob.
Posted by Telecanter at 1:20 PM