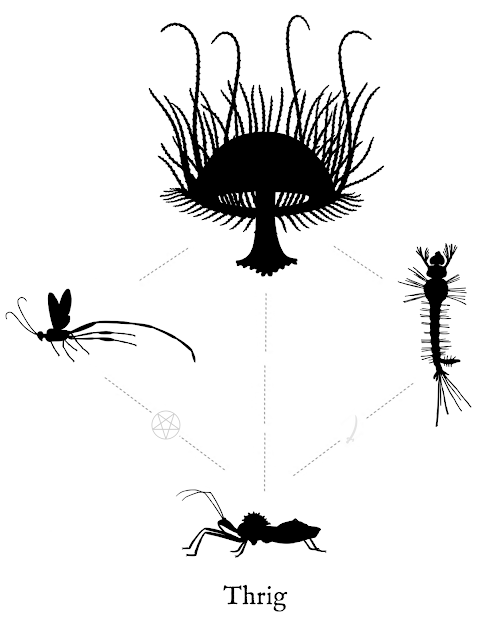 It's funny, as many times as I've thought about monsters there always seems to be a new angle.  Yesterday's post got me thinking, what would a monster that takes a whole page to explain be like?  I mean if it needed the page and it wasn't adventure hooks or other useful but extra stuff.

Thrig
Thrig are human size bugs found underground.  Their hives are made of paper like a wasp's, though the cells are ellipsoid, smell of ginger, and have thin mithril threads running through them as support.

They are protective of the territory of their hive.  Hundreds will come swarming and biting if intruders are detected.

Here's the catch, if a thrig is killed by physical harm its corpse will start shuddering the next round and hatch out a Floater.  These will attempt to attach to warriors and carry them off to suitably distant locations in the dungeon, often dropping them from heights.

But, if a Thrig is killed by magic, it will metamorphose into a Layer and attack any spell casters nearby, thrusting its long abdomen down their throats to lay Thrig eggs in the victim's stomach.

Well, I guess that's not quite a page.  I could go into more detail about how to handle the two grappling-type attacks and maybe even complexify the cycle a bit with more ways to kill them and new Thrig that result.  Oh and I never explained the Queen . . . yeah that could be interesing maybe a chart of effects it could cause in characters.

And in the end, it isn't really one monster just several subtypes with an interesting way to produce them.

Anyway, now it's your turn, what would be an interesting monster complicated enough to takes some room to explain?