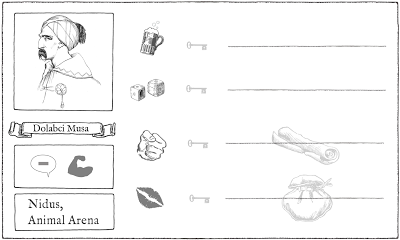 For me, keeping track of who the players have met, what they talked about, and what those npcs want, is one of the last big bookkeeping hurdles that gets in the way of my game.  I want the world to be about more than just exploring dungeons but to do that I have to set up some simple infrastructure to help me deal with all the information.

This is a rough draft trying to get at that.  I talked about npcs as locks before.  That was thinking certain topics would unlock new information and finding the topics would lead players to talk more with npcs.  Here, I made it a little more video gamey; a specific approach or activity will get you new knowledge.  So, you can see with this gentleman if you drink with him and you learn something.  Gamble with him a bit and the conversation will reveal something else.  You might find out what activities work best by asking a different npc: "Hey what's your boss all about?"

But I could easily see a different set up with a topic-unlocks-topic focus.  Some of the things revealed could be npc secrets.

The bottom two bits are another idea where what is revealed isn't a rumor or bit of personal info but a hook that leads to something in the world. So, intimidate the guy and he'll reveal the location of a rare spell he's heard of.  Seduce him and he'll tell you about a treasure trove, or maybe the purse is more a score you can make if you want to rob someone.

Under his name are some traits.  I see no reason to list out full stats for every person in the world.  I'll assume they are all average unless noted otherwise.  We can see he is not talkative but quite strong.  If you want to generate some more from these terse details-- maybe the fact that he can be intimidated even though he is strong means he's a coward, or maybe he's just a pacifist.  Uhh, maybe not if he's involved in Nidus' brutal animal arena where exotics go to die.

This is assuming some prep-- you know they might interact with the heads of the big animal fighting clans or whatever.  But I can see a totally different set up for impromptu npcs that would allow for recording bits you generate each time they show up like this.  I guess it's not good to have too many different npc forms, but we want the tools that help us do the job.  Actually, I could just put that on the flip side of this 3x5 card.  It might actually help me keep track of which npcs players have met and which they haven't.

You know what, let me go and mock up something to use that make-them-as-you-need-to format of Zak's. . . .

Okay, about forty minutes later here's what I've got: 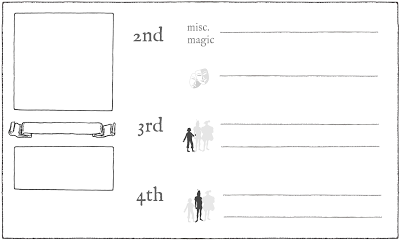 Blank spot to sketch or paste a portrait in.  Blank spot for name and for traits underneath.  Then the spots to record info for each additional meeting with the npc.  (and I'm thinking space age again-- a tablet app that randomly came up with the result from the appropriate chart when you tapped those line would be sweet.  Then it would let you lock it in or re-roll).
Posted by Telecanter at 11:45 AM