I was never as excited about Jeff Rient's Carousing Table as everyone else because it seemed the only player that would roll on a table that takes your money and gets you into trouble is thinking a little more extra-diegetically than made sense to me.  Or maybe I should just say I doubt I would take the risk with any of my characters.

But then I got to thinking, what carousing is really doing is injecting some story complications from outside player or DM contributions into the game that has few ways to do that.  Well, the players are choosing to roll on the table, so you could say they are injecting these twists, but they don't know all the possibilities on the chart and they certainly aren't making up bits of story on their own.  Neither DM nor players have to be responsible for it making sense or being good, or all the things you might feel responsible for if you were plotting out a railroad.  This works because when carousing you are presumably soused out of your mind, so the player can feel okay about giving up some agency for any choices they make while carousing.

I realized this some time after making my table that let's you know what you did when you were a werewolf.  Which absolves players of responsibility in a different way.  And I started wondering if there were any other ways than carousing or lycanthropy you might inject some story-like twists without taking away the players' agency.  And I thought the one thing we can't choose and all have is Family, baby!  And thus was born the Dramarama: 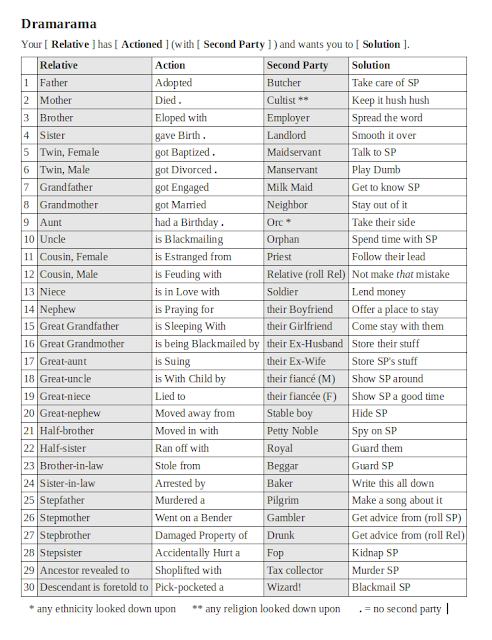 Roll 4d30.  First tells you which of your family members is causing a ruckus, second what they are up to, third is for who else is involved and fourth is what they want from you.

There are nonsensical and gonzo results possible, as well as results that may require a little interpretation work on you part.

Why would players want to mess with this?  Well, it could be a "fee" for coming back into town.  That would keep players from shopping incessantly or hunkering down and not exploring.  I would probably roll randomly to determine which party member was affected once per session spent in town to go this route.

Or, you could balance it with reward: allow any player to gather a rumor per roll on the Dramarama or gather more information about things they want to investigate.  Presumably their sprawling chaotic families have heard lots.

Of course, the results from the table could be completely ignored by players.   But I would probably make the Second Parties involved or local authorities (for the more criminal results) put some pressure on PCs about  the issue somehow.

I'll upload a pdf when I'm back home.

Update: Here is the pdf.
Posted by Telecanter at 11:32 AM