I'm frustrated.  I have an idea for a way to illustrate dungeons but I just don't have the ability to pull it off.  Or at least I don't have the patience to try long enough so that I get better at it.

I think a lot of information can be conveyed on a map visually.  I'm not talking glossy, glitzy, colorful maps you want to frame.  Just isometric.  Something like this: 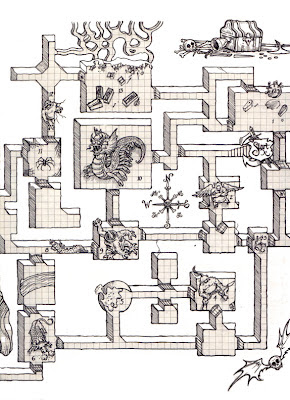 Although it could take advantage of height differences more, you can easily see that the entrance stairs lead up, see the slime is on the ceiling, see the water running just below floor level, see webs, see the broken coffins.

I know this idea isn't new, the example pic is from '79, but imagine the room contents were monster silhouettes and below the map you have a visual key-- no room numbers, no room letters-- just a spider silhouette with its stats that your eyes can quickly flick to.  Treasure items could be handled in a similar way, if not by silhouette, than by small image-- look below and the ring's magical power is right there next to its image.

Wandering monster chart could be just as simple, a set of silhouettes similar to the monsters in rooms.  If they duplicate a room monster you don't even have to add a new entry for stats, maybe just a new "# appearing" in the encounter chart.


I just can't draw the isometric part to my liking and my gimp skills always seem to be just shy of what I want to accomplish.  Pretty bad when you can't even produce a proof of concept.

I'm pretty bad at revising or even finishing things in general.  I know I've got a lot of unrealized posts here (like just yesterday).  I always hoped that ideas would be a valuable thing to share with a community but as I blog on I realize implementation is more valuable because it's just as hard as the initial idea if not more.  It's kind of a bummer because I always wanted to provide tools to help others make things, to provide the spark, the innovation, not just make products.  But the making is the hard part.

I think I need to take a break.

Update:
I apologize for the drama.  And I hope it didn't seem like I was fishing for compliments.  I went and had a super fun and funny D&D session on Friday, chilled a bit building some rail line in Minecraft and recharged my batteries.

As always, it's more complicated than I first lay out.  Some thoughts for me:

Thanks for all your comments. I'll soldier on and see if I can eventually make what I have in my head.
Posted by Telecanter at 4:58 PM