I got very excited because I was going to mash together Roger's idea of tetramorphs with stencils and iso-like map making.  I made some mistakes, didn't exactly get what I wanted, but learned some stuff.

The five basic shapes from Wikipedia: 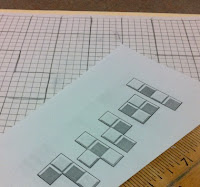 I like using stuff for these tools that is easy to get, so index cards etc. But I found index cards a little too thin to make good stencils. So, I cut out 3x5 bits of manilla folders instead, which I have a lot of at work: 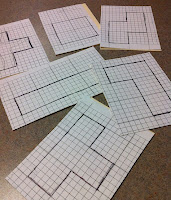 The first thing I thought of was waterways, underground rivers. So I drew some and cut them out. I added a little register hole so that when I shift, I shift them all the same distance: 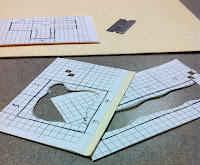 I remembered some blog commentator pointing out the d8 as a good way to have a pointer, so I number the tetramorphs 1-8:

So the idea was to throw the d8 on your paper, the tip at the top of the # would indicate how to lay the first tetramorph, the number would indicate which one: 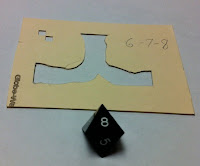 Then I rolled and just matched up the later tetramorphs to the ends of the first one in a clockwise manner. Shifted, erase to make an iso-like waterway (sorry for crappy pics):

And, this is where, astute reader, you might be thinking, "Wait, why did they need to be tetramorphs, you didn't use their best feature which is fitting together in a puzzle-like way?"

Yep. I only realized that after making these. I want to do a second draft where I do just that, making the stencils actual tetramorphs that you fit together.  But I'm realizing size might be an issue. If you want to base the squares in the tetramorph on the 5 squares to an inch graph paper scale, and you want to make a stencil out of that, you start running out of space to draw rooms.

And as for using these shapes for waterways. I love underground rivers in dungeons. Love. Them. Not sure why, but yeah, forcing into these 5 shapes for something that can be so much more sinous seems too limiting. I'll be on the look out for better alternatives.
Posted by Telecanter at 1:03 PM