I watched the Lord of the Rings again with family over the weekend.  And when Strider points out Amon Sûl, something struck me.  An icon on a map isn't going to give players as evocative of sense of that place as an actual image.  And I thought of Victorian illustrated texts with their illustrations framed in circles and rectangles that nestle right into the text.  Why not do that for a player map?

I'm pretty sure I've seen these on tourist maps and historical ones, but I can't seem to find any.  And I don't remember ever seeing a module with a player map that utilized this kind of zoomed in insert.  I hope you correct me with a bunch of examples in the comments.  Anyway, I wanted to mock up a crude proof of concept: 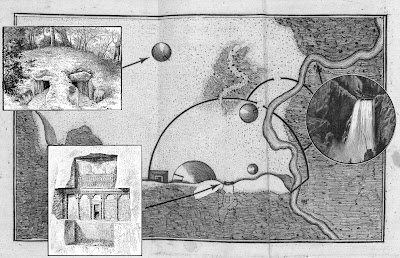 I realize now that this is basically the same as Zak's illustrated dungeons.  But then those are meant for the DM, and what I'm imagining would be meant for players, to help them decide where they wanted to go in a sandbox.

The inset pics would need to be things that were fairly common knowledge to the surrounding communities.  Essentially, the pics are a stand in for the rumors, descriptions, and lore people tell the players about locations.  If players are exploring new territories, and you feel up to it as a DM, you could add insets as players pass close enough to featured locations.

Update: I played around with the idea a little more.  Imagine these insets bordering the whole map, those near the starting point of the campaign filled in, those farther away unknown.  But, you know something is there.  You could give players XP for every Wonder of your campaign world they uncover. 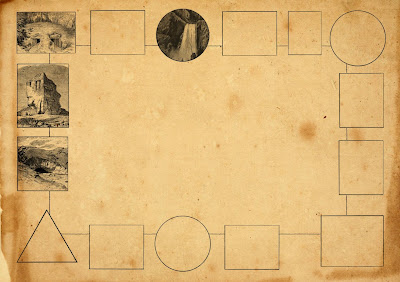 Posted by Telecanter at 7:59 AM