The Story of Potions 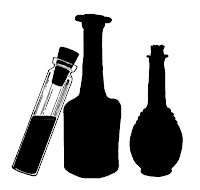 I went looking at how potions have changed over the various versions in order to decide on a standard set of potions for myself.  I was quite surprised at how conservative they've been. Here is a pdf from OD&D to 1e. 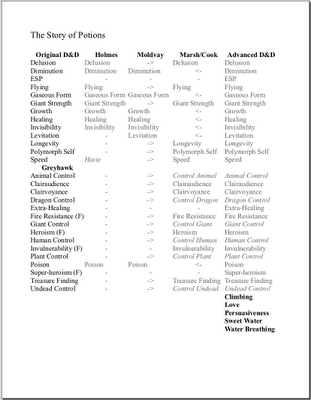 Holmes and Moldvay are meant to only cover the first 3 levels of play.  It's interesting that they streamlined the list of potions (10 for Holmes, 7 for Moldvay) which implies some potions are considered higher level, like spells would be-- or maybe some are less essential archetypally if you're streamlining.  But, with the Marsh/Cook expert set, every streamlined potion has been added back except ESP, Extra-healing, and Super-heroism.

And with AD&D not only are those added back, but all name changes (mostly the Control potions) are reverted.  So, really, the only difference between OD&D+Greyhawk and AD&D is the addition of 5 new potions:
2e cut Extra-Healing and added 10 more, but only Armor wasn't already seen in Unearthed Arcana:
It seems that some of these are drifting into the realm of too specific to be standards, Rainbow Hues?  Where would that be useful outside of Carcosa? Elixir of Youth is a weak Longevity.  Glibness doesn't seem different enough from Persuasiveness to warrant another potion.

I don't have a 3.x era DM's guide (anyone got one lying around?) but I looked at the Rules Cyclopedia too.  There, 16 more potions were added:
Philtre of Love and Sweet Water don't make the transition.  Speech looks to be a replacement for Philtre of Persuasiveness.  Note that Oil of Ethereality has become ingestible.  Merging is another odd specific one.  I'm guessing it's meant to be drunk by a thief who can then sneak the whole party past guards or something?  Dreamspeech is like a combo of Speak with Dead and ESP.  I do like Antidote and wonder why it took so long for it to appear.

For example, I want all the Control Potions to be scrolls.  Why would drinking a potion let me control something outside of me?  Yes, I know it's magic, but I mean the literature seems full of counter examples-- shapeshifters and Mr. Hydes.  You don't use a potion to affect someone else, you use a wand.

Following those three points, I really like the later additions of:
I wonder if there are other effects that would be good to add?  Maybe the traditional ring power Water Walking?


I don't like the idea of potions specific to certain classes, for example, fighters.  It seems too fiddly.  Besides, something like Invulnerability allows for a weak mage to be fighter-like, while Levitation allows the fighter to be mage-like.

I would like to have 30 or less standard potions.  Maybe 20 if I can trim it that far.  I can always add weird oddities on top, but I'd like to have a stable base that players can learn about so they can start making decisions based on them.  This is all a culmination of using random charts to determine potion qualities and magical effects.  It was getting too random.  And seems odd to ignore the building blocks that have worked for decades in play.
Posted by Telecanter at 2:11 PM