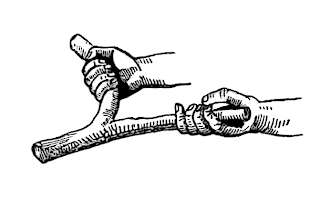 Here is a pdf of 20 wands of detection.  Here is an editable file so you can use this framework but make it your own. 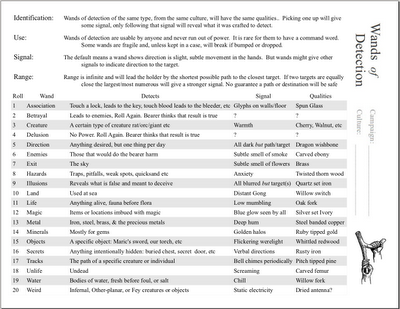 Wands of detection seem like a really cool, old school item because they are leading you somewhere-- you have a hook and direction-- but you don't know where or what to expect along the way.  I especially like the idea of the party having to identify the wand by following it to its target.

Blasting wands can be limited to magic users but I think everyone should be able to pick up one of these things to see where they lead.

Some versions of D&D give these charges and limited ranges as if they were powerful tools, but knowing a trap is about isn't the same as knowing how to get past it safely.  Likewise, knowing a cache of gems is somewhere in the next room in no way helps you deal with the bugaboos that might own them.

One kind of wand I didn't fit that I think would be cool is the breadcrumb wand, set a location and then later be able to find your way back to it.  One signal I wasn't able to fit but think might be interesting, is: the wand gives the bearer a permanent idea of the location of the target until that location is visited.  They don't need to have the wand any more.  That means you could be searching for an NPC that knows exactly where the tomb of Zarglfarger is, but has never been there, etc.  Wands with this kind of signal might be kept in mage guilds and used only by appointment or membership.
Posted by Telecanter at 10:30 AM