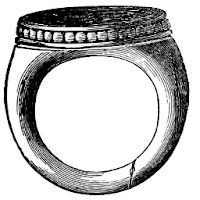 First, you should check out the great posts by heyjames4 on rings here, here, and on wands and staves.

I took what he did and tweaked it for my own campaign.  Here is a pdf and here is a file to edit to your own taste. 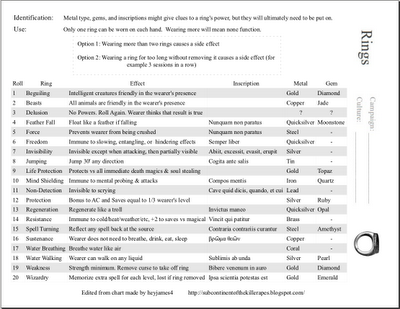 So, in trying to differentiate magic items into distinct Gygaxian building blocks, rings are different in that their effect is infinite.  Any ring with charges should be a wand.  Because of their always-on nature they are the magic item best for contingency-like effects.  I think Feather Fall is the quintessential magic ring.

Once I realized this, I invented a ring of Force that produces an impervious forcefield around you when being crushed.  The idea is to provide protection against deadfall traps the way Feather Fall does against pits.  I also ported the amulets, Life-Protection, and Non-Detection to rings.

I like the X-Ray power but think it should be some crude spectacles a character has to wear.  I took out Telekinesis because it just seems to damn powerful.  Maybe it will feel better to me as a charged item like a wand.

I think invisibility is pretty damn powerful too and should probably be a potion, but I can't escape the tradition of the One Ring.  I did duplicate the Water Breathing power that I had previously as a potion, because it seems like a good one to be able to use continuously.  Maybe I can replace that potion with something else to keep the lists distinct.

Rather than side-effects, I thought inscriptions might be more appropriate for rings.  I plugged in a few Latin mottoes, but you could put in riddles or Esperanto or whatever.

I have to give heyjame4 props, I never thought of a ring made from mercury and the image of the ever-shifting stuff around a finger is cool.

A couple ideas for rings that this page doesn't get at: 1) Harmonious or negative effects when two ring types are worn together, so for example, you put on a Ring of Non-Detection at the same time as a ring of Invisibility and you become ethereal (but that could be as many as 400 possibilities!), and 2) ring pairs that function together.  ze Bulette's portal rings spring to mind, my rings of the joined, and heyjames4's idea which I call: Rings of Friendship: pool HP with the person that wears the other ring.
Posted by Telecanter at 12:59 PM