Having the one-page potions doesn't mean I want a boring, standard fantasy world.  I mostly just didn't want to miss out on the useful subsystem that has been tested and known to work. 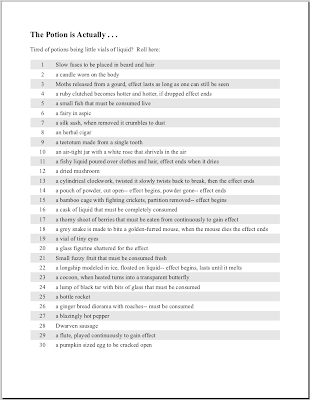 Here's a table to add some spice on top of that potion subsystem.  I was riffing on one-shot devices, items that last a limited amount of time, and things you have to consume.  That could probably be three charts right there, but it was hard enough to squeeze these out of my tired brain so I'll leave those charts to you.  Have a nice weekend.

Update: Whoops, I forgot to put an icon to distinguish this from the 400,000 other charts we all use so I added one.

Also, umm, many of these complicate, if not do away with, the "sip to indentify" technique.  Forgot about that.  You may want to have little "eat me / drink me" type labels  identifying what these do, or else have them come to the party by way of knowledgable NPC
Posted by Telecanter at 3:14 PM