Weeks in the making, with a cast of hundreds, I bring you Animal Arena!


Resplendent in silks and hennaed patterns, radiant with gilded hooves and tusks, the animals are led into the amphitheatre to the peal of bells and horns. And those placed together are often so exotic and absurd, it all seems more a holy pageant sacrifice or display of decadence than a fighting event. 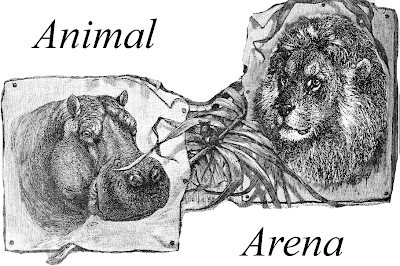 In a nutshell:
We had a session last night that involved a kudu goring a camel, a tortoise bitten to death by rattlesnakes, and a grizzly fighting a walrus. Players seemed to enjoy it.

Okay, it's still Beta if you want to bet on the outcomes.  I envision players getting to bet at the announcement of the first animal, at the end of round 1 and at the end of round 2.  But the odds should really adjust based on the attack power of each animal involved and how the rounds have gone so far.  Unfortunately, I am neither mathematician nor bookie.  Maybe someone can offer a system/chart of odds I could include in a revision.
Posted by Telecanter at 9:11 AM