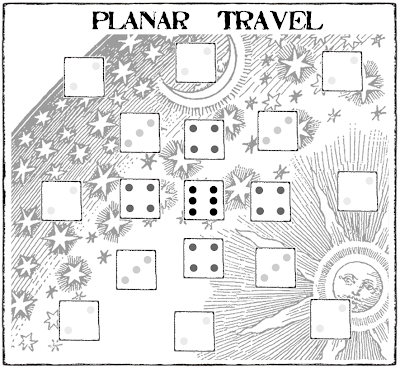 Because I don't have any typical images in my head for travel through the luminous aether, I made this one a little more abstract.  Also, I don't have any experience DMing folks through planar journeys, but I imagine this could be modifiable to lots of different applications-- travelling through dreams or psionically, for example.  For that reason, though, I have no idea what unit to use here, whether it be time, space, or number of planes jumped.  I leave you to figure out the particulars.  Here we go:

The character that initiated the travel begins in the center.  The rest of the travellers are arranged around the initiator concentrically.

Every unit of travel each traveller must move one position as they are jostled about in the aether.  Before moving each player rolls a d6.  The position they can move to can only be their die roll or lower.  Only one player can occupy a spot at a time.

If a player rolls lower than all adjacent spaces they must move to the lowest space next to them.  If a player on a 2 spot rolls a one or has adjacent spots blocked, they slip into the void.

Once a journey, players with exceptional intelligence can add their bonus to any persons die roll.

So, it isn't too likely for someone to get jostled off unless the party travelling is large and starts blocking each other.  But with the penalties to combat, players will still want to stay as close to the center as possible.

What does slipping into the void mean?  Seems like a pretty good adventure hook to me, probably they end up in a plane they least expected.  What happens if the initiator of travel slips off?  Ooh, seems like they'd take everyone with them, don't you think?
Posted by Telecanter at 7:23 AM