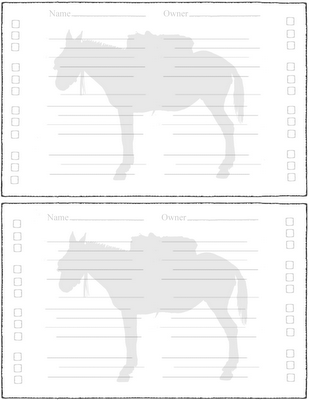 So I went back and added spots for name and owner as you can see. The checkboxes are for hitpoints. You darken the outlines of all the hitpoints a particular animal has. There was some variation between rule sets so I just put down 24 for mules and camels. That's enough for 3 eight sided hit dice and you can use less if your ruleset uses d6 hd or whatever. In combat you pencil off checkboxes as they take damage.  You could even put little asterisks or colored marks between boxes to flag when an animal would try to flee or go berserk (thanks to Carjacked Seraphim Jim for that idea). 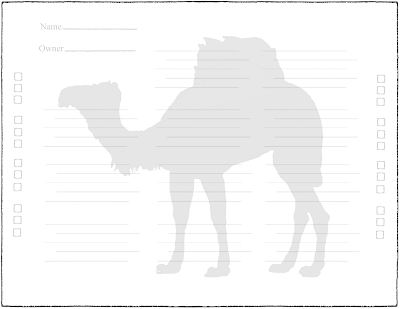 Here is an elephant with a mahout and howdah meant for tiger hunting. I couldn't find any pictures of elephants straight up carrying loads. It seems there were either used for transport like this or bulldozers moving logs around with their tusks.  So I'm not sure what to do with them.  I have some ideas-- maybe put silhouettes for how many armored adults they can carry, or insets that will blow up to full cargo sheets of 450 lbs each. 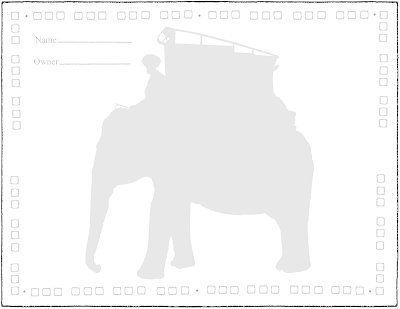 But I'm not sure how much Indian elephants can carry.  Such a simple range to want to find and so hard to find online.  Same with gorillas, I saw that they were anywhere from 6 to 13 times as strong as a man.  That's arm strength though, doesn't mean you could even fit all that weight on their back.  I'm thinking they might only be capable of carrying a smaller pack, something closer to the mule, but come with the extra capabilities of opening doors and bending iron bars like a beast.

If you have suggestions of carrying capacity for different creatures, or know a place that has them let me know.  I keep looking at the AD&D Wilderness Survival guide, but they gave 500 pounds for a mule which made me doubt their judgement (some mules could do that, but I think the average mule was smaller).  How about dinosaurs or mythical creatures?

Oh, and the elephant has enough boxes for 10.5 eight-sided hitdice.  If that isn't enough for a particular ruleset let me know, but I wanted it to look aesthetically pleasing too.
_________

Late night addition: It's pretty cool learning how these different animals are good at different things maybe this is the first step to having these kinds of creatures more real in my world.  For example, llamas carry less than all the others but eat less and are even better than mules on treacherous terrain.  They are fine in the cold too. 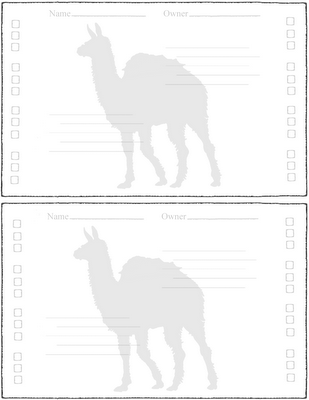 I'm not really happy with the llama's silhouette, but that's the best I could do after hours of looking.  Only 10 slots here which gives you ~75 pounds.  Again, bigger individuals could probably carry more, but we're shooting for an average to take extra rough trails into account, etc.  Not sure how many hit points they'd have.  I just left the mule's checkboxes because they are symmetrical.
Posted by Telecanter at 12:05 AM