Praise for an old Flash Game 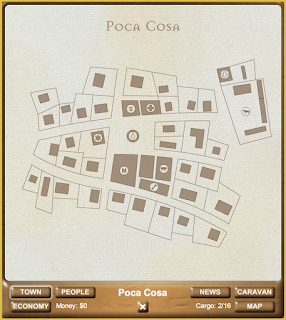 Caravaneer has been around for years.  I don't remember if I started playing this again recently and then thought to make the simple pack animals posts, or if it was making those posts that reminded me of this game I've played for hours in the past.  I think it is the most sophisticated flash game I've ever seen.  Even though it has simple graphics it offers a play experience that is reminiscent of Fallout 1 with less dialogue but more trading infrastructure.

In a nutshell, you're in a post-apocalyptic world and can take items from one little town to another for a profit if you can make it past the ubiquitous bandits.  In the early game you'll be limited to livestock as transport.  There is a pretty good selection with camels, donkeys, mules, horses or oxen and various carts to be pulled by the non-camels. 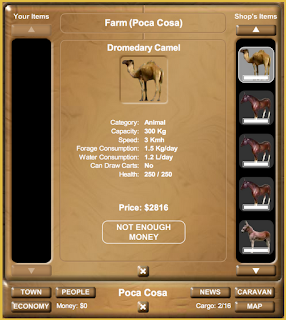 All these creatures require different amounts of food and water as well as travel at different speeds.  So you have to decide whether you want to travel more efficiently but slowly and have to fight all the bandits, or less efficiently and fast enough to outrun some of them.

Travel is abstract on a overland map that zooms in to a top-down battlefield.  Each character has a certain number of Action Points to expend each round and different actions, like firing weapons or reloading, take different amount of APs.

I'm a sucker for the dromedarys and their supper low food and water requirements.  So, I'll usually have a long train of them and then have to fight every step of the way to get from one town to another.  One good thing about this is that you can train up the number of APs and the gun accuracy of your people in these low risk fights for when you need them later in the game.

The game, like D&D, changes as you progress.  As you trade with towns it allows them to progress and grow out of the need for the very product you were trading and it becomes necessary to reach farther, to newer towns, to make money.  Eventually you'll need to upgrade your weapons and hire more caravan guards to even survive.  And then you'll probably want to upgrade to vehicles-- atvs, jeeps, hummers-- to outrun the deadliest bandits.

The game gets a little grindy (this is partially because of the slow travel I tend to use) and I think could do with less frequent bandit attacks.  It also feels like it rushes a bit to push you from one stage of the game to the next; you barely make 2 trips on your first trade route and the towns don't need those supplies any more.  A big flaw is that bandit partys drop all their gear.  It's cool to be able to sell some stuff when you defeat robbers, but It undermined the excitement of upgrading when bandits were dropping stacks of guns better than I'd seen in any shop yet.  I think all the detail spent on handguns is wasted because their window of usefulness is so small.

The game, though, is a perfect example of a computer being used by a game to do what it does best.  Water requirements, food usage, trading prices, all the number crunching is taken care of by the old mechanical brain.

Caravaneer was made by Dmitry Zheltobriukhov and is available from Sugar-Free Games as ad-ware.  I hear it is possible to find an ad-free swf file to downland. I could go on, but you should try the game out on your own.  And, Dmitry, if you see this, I'd buy a PC game like this, if you made one, maybe with the addition of setting up your own shops in towns so I could sell all the dang glass bottles robbers drop.
Posted by Telecanter at 12:38 PM