Into the Dwarven Outpost

Before I go on to the camp-fire game I should tell the tale of my solo player.

Rumor said villagers were going into a cave and coming out with gold coins, until recently.  Anyone going in lately hasn't come out.

Sol entered with his doughty hireling Cirrus.  She is 60, constantly plucks at her short hair, and carries a spear.  They have little gear between them except a 10' pole and a lantern. 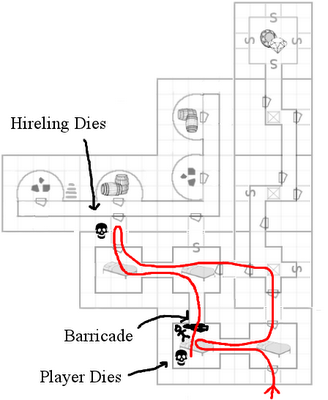 On entering the first room Sol chooses to take take the open hallway to the left.  In this room there is something that looks like a brass set of armor lying face-first into the corner.  Someone has hastily barricaded an open hallway to the north.  Sol is leery of the brass suit and only gives it a cursory examination.

Sol backtrack goes through several doors and finds himself in a room full of bunkbeds too short for normal humans.  He searches the beds and finds a strange ring of mercury that has letters inside that read "Invictus Maneo."  He gives the ring to Cirrus for safekeeping.

Upon entering the room he found the ring in, he notices a glossy-grey crab-like thing scuttling toward the noise of their battle.  He heads down the hall and dismantles the barricade.  The creature follows.  It opens up like a clam shell revealing three naked fleshy things like gophers.  Sol fails to smash them with his mace.  They clamber onto him.  He dies with them tearing at his throat.

A couple interesting DMy things.  He asked Cirrus' advice several times and I as a DM had to act her part and try to do it while knowing everything about the place.  Kind of a weird position to be in.  As I always do when I find the game puts me in a weird spot I just rolled dice.  If the result of 2d6 was high she was confident and aggressive, if low she was not.

And, it looks like another data point for Door Priority.  The un-doored hallway was chosen over a door.  The barricade was a little scarier than a door.  the first part of the Dwarven escape route is a bit of an anomaly because I had a hard time describing it to him while he was driving.  That little plus sign shape with a corridor heading up to its left is not an Easy-Map Dungeon.

Actually, a map you can describe to someone who is driving is probably a good touchstone for an Easy-Map dungeon.
Posted by Telecanter at 9:27 AM