Some caveats:
Okay, so here, in 4 steps and 2 pages, is a way to offer your players some new toys/tools.  It is much more likely that players will have powers than in the older systems (someone with one exceptional stat has a 1 in 3 chance), but I figure what's the point in having a cool subsystem if no one gets to use it (do you know how many times I rolled for psionics in 1e and failed?!). 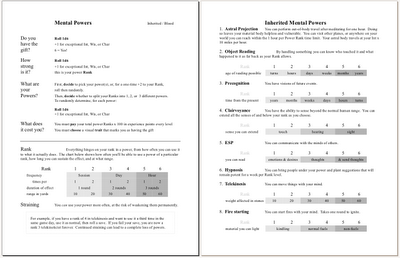 I've tried to limit the powers so that even if a whole party gets them they won't be flinging dragons around and flying about like Glitterboys.

I wasn't sure whether the player-empowering choice of abilities or the fun of randomness was the best approach so I tried to have my cake and eat it too.  Players can sacrifice choice for additional power.  This also offers a way to mitigate really crappy power rank rolls.

I tried organizing the powers by how much of an affect they can make in play, and making those most powerful less common, but this order could be easily changed-- moving Hypnosis up, for example.

Of course, you could tinker with everything here-- like making the units of weight 100s of coins rather than stones-- I think the main innovation I'm trying, is to avoid power point tracking by using the more granular session, game day, hour divisions inspired by 4e's encounter powers.

The briefness of the power descriptions will require some thought from each DM, but I'm hoping this is just enough to make a system while stepping out of the way to let you decide how things run in your game.

Update: Whoops, I made a copy paste error, I originally intended the telekinesis power to allow for moving 1 stone per power rank, which is 1/10 the power listed in the first pdf I posted.  So, if you saw that someone with TK could move half-ton boulders and thought what is he talking about "I tried to limit powers," umm, that's why.

Of course you can make it whatever scale you want but I would suggest something that is easy to remember for your players.
Posted by Telecanter at 2:46 PM