Where did pig-nosed orcs come from?

I imagine the answer to this is on a forum somewhere but I can't think of anything less inviting than an rpg internet forum.  I don't think anything to do with Tolkien's orcs would suggest a pig nose.  I suppose it could be just a beastly addition to make them less human and easier to kill without guilt.  I suppose it could have been added to try and make them distinct from the gajillion other humanoids.  Or maybe it was just the whim of a particular artist. 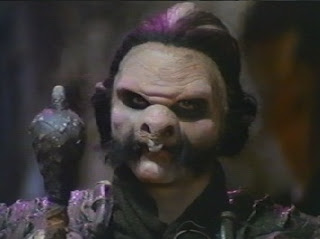 Well, The other day I watched the movie At the Earth's Core which is an adaptation of Burroughs' first Pellucidar book.  In that book the soldier race that serve the evil Mahar are the ape-like Sagoths.  But in the movie they don't look like gorillas, they look like humanoids with pig-noses.  I wonder if this movie might have been where pig-nosed orcs came from.  The Sagoths in the movie act very orc-like: are war-like, brutal, speak a different language, and act on the initiative of a more powerful evil. Coming out in 1976 it pre-dates the Monster Manual and might have been early enough to influence some of the artistic depictions.  I'm curious what other possible origins have been given for pig-nosed orcs.
Posted by Telecanter at 10:05 AM