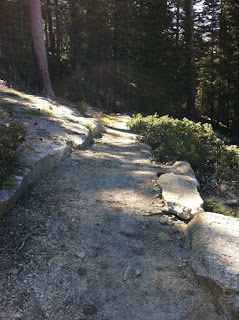 Spring snow melt, limb falls, and tree falls will obscure a trail in one
season, obliterate it in two, unless it is maintained or very well
built.  The different races make different types of trails in the
mountain wilderness.

Elvish trails are social.  Meaning there are no markers, but individuals who know a way.  To learn a trail means to have someone show you the way they go.  There is no best way and often as many paths between two points as individuals.

Dwarves survey an area, then build a trail along the optimal path.  Their trails are engineered like small roads with standard procedures and materials.  Usually 4' wide, they bridge waterways, cut into cliffsides, and take into consideration drainage and erosion.  These last for centuries unattended. Dwarves do not care that they are easy to see and follow because their homes are great fortresses.

Orcs, like pigs, take the easiest path up or down a mountain.  They will not work at a trail unless forced.  Then they might push trees over waterways and mark paths with piles of rocks or their own dung. 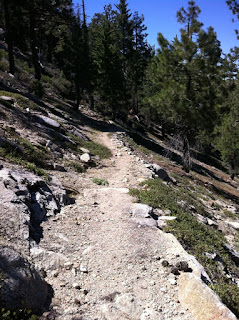 Humans are various and unpredictable. Some see trails quite like elves.  It is said the Tainish rangers have a proverb-- journey once, your trail.  Journey twice, my trail-- but it's hard to say if this is true because they are so secretive.

Some see trails more like Dwarves.  Emperor Claudius Vibrius ordered a series of tunnels bored right through the Copper Mountains for a merchant trail.  The cost was immense in lives and gold and some say things were uncovered, deep under the mountains, that are better left to sleep.

Others have their own ways through the wilderness.  It is said, before Heirus the Eremite, the forest opened up with a sigh, rocks and logs rolling aside for him.  Imran the Solitary blended like a chameleon as he levitated slowly through the forest, making even the Elves wary of him.

Hobbits do not like the forest and rarely venture there, which is odd, because they are so well suited for it.  Stories say those that braved the wilderness were so light of foot and quiet they could walk up and pet a doe before she knew the hobbit was there, and that even Elves have trouble tracking them. 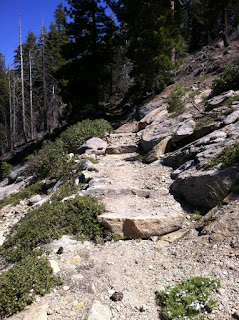 Some say there are secret trails that are well-built of stone and redwood, as if by Dwarves, but camouflaged behind manzanita growths and the contours of the land itself.  Who made these?  Elf and Dwarf together?  Gnomes?  None know, but the Elves often use them as do the oldest and wisest of the rangers.
Posted by Telecanter at 5:33 PM