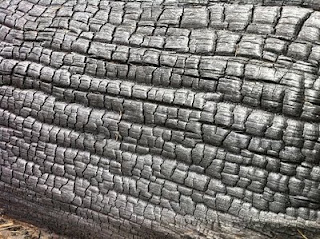 Char
Video Game designers, use this as the texture for salamanders or, better yet, black dragons in your next game.  And make sure it's glossy, and has that squeaky-crunchy sound when you hit it with an axe or sword.

Seeing this texture makes me think of a large toad that's skin looks just like charred wood.  It burrows underground and up into firepits.  It likes the warmth and it means bad news for all the adventurers around making s'mores.  Why?  I'm not sure, but anything interrupting s'mores is already dire. 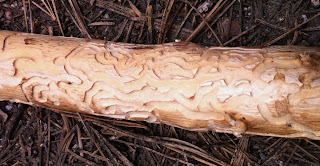 A One-Stick Dungeon!
I've always loved these beetle(?) paths.  Party asks the druid, "What's the path look like up ahead?"  Druid pulls some bark away from a stick, "We better turn back now."  Maybe these could be used as a material component for a Maze spell. 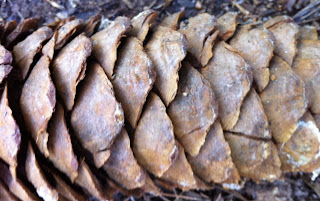 Scales
Treant brood are actually humanoids scaled like pangolins.  After a good, long life of mountain warfare with orcs and giants, they put down roots and transform.  Giant Sequoias actually have small cones compared to other trees.  Oh the comeuppance, when the little cone-boy picked on by all those pines turns into the Gentle Giant!

Oaks
When I think of foothills, I think of oaks.  Mountains, conifers.  But there are actually some mountain oaks up pretty high.  I saw some at 6500ft.  So if you need adventurers to run into a deciduous dryad in the mountains, it's possible.  She'll just be smaller and colder.  That makes me think about the trees just on the edge of the tree line, battered, wizened.  If those trees could talk, or had dryads in them, that would be a place to find out things about the world.

Wings
I go by the general rule that adding wings to things makes them cooler.  So, winged giants.  That would scare the crap out of me.   Think Paul Bunyan Angel crashing down in the forest ahead of you.  'Course, I'd jump on my winged-bear and get the hell out of there.
Posted by Telecanter at 2:08 PM