Roll all the Dice 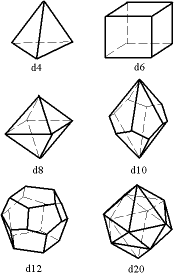 I've talked about Delta's idea of a less granular encumbrance system and Bohemian's "Good At" skill system being catalysts for me blogging and wanting to jump into the OSR. I forgot to mention Grim's Roll all the Dice generators. The documents in question:
can all be found here under General S&W Resources.

These are probably old news to you, but I wanted to praise them and think about them a little. First, they are something I hadn't seen before. They are an innovation and innovation is what got me excited about the OSR, not nostalgia. This kind of creation is wonderful, not because it is an intensive work produced by the author, but because it opens up possibilities for me-- I immediately started thinking of other possible Roll all the Dice type charts.

Secondly they are elegant. I wondered about this at first (maybe still do), because it would be much simpler to roll one die and look up a result on a chart. But it would be impossible to build one chart that can perform the functions of rolling all the dice. By throwing all the dice at once you can tailor many different probabilities at once and, really, while the action of throwing all the dice on the table may seem crude, have a very fine grain control over the results. Perhaps that's what appeals to me, the elegance is that you can sweat and think and plan over the exact results tables you want, but this is all hidden in use.

I think the other thing that may alleviate any complexity of having to squint at the results of six dice is that it becomes game-like. Like the idea of games with-in games Delta brings up, it's actually exciting to see what the result is. And it might be a good idea to even let players roll where feasible. Why not let them rool up a random treasure map or the patrons in a tavern (both to be fleshed out by you for later play)?

I've been working on my own game project for about ten years now. It started out as a different rule system, but morphed into a way to play solo, with less interest in creating the next D&D so to speak, than a way to implement dungeon exploration by my lonesome. Part of this project was determining treasure on the fly, so that it would surprise me, the DMless player. This was a difficult problem, because you want as many possibilities as you can, but too many leads to a complex series of charts like a phone book. I've dug up that old treasure list and am trying to see if Grim's Roll all the Dice method can be a neat way to walk that balance between richness of detail and elegant simplicity. More on that soon.
Posted by Telecanter at 6:59 AM