Last week we left our heroes in the midst of a ruined convent holding a crying infant they had just pulled from a well. They were catching their breath after slaying two black ants the size of dogs.

Part 1: Two New Adventurers and a Few Deaths
This week found a second party investigating the ruins heading toward the sound of the infant. The two parties met around the well. At the same time the noise drew a sizable band of bandits. They seemed to be hungry and a little intimidated by all the serious men-at-arms in the party.

Over the wailing of the baby, the mage Ricarda argued that the baby should be abandoned. Warrior Anselm didn't seem to want any part of that idea. Finally the mage Ehud thought to offer the infant some food and it fell asleep.

The bandits were appeased with trail rations and water in exchange for information of where the party might find books. This information led the party to a roofless corner room filled with manzanita. Apparently the remains of the convent library, they saw chains sunk in the walls attached to the remnants to books. While investigating the chains the burly fighter Henry was set upon by a pack of lean gray rats the size of cats. Poor hireling Warmund (who had climbed down the well to get the baby) was felled by the rats. Ricarda cast sleep dropping them all and Ehud set about crushing their small skulls with his staff while Anselm covered the party with his bow.

The books attached to the chains turned out to have weathered to nothing but thick leather covers. But Ehud stumbled on a heavy oak trunk almost completely buried underneath the manzanita. The trunk yielded a rotted canvas sack of carved ivory mice, a leather wallet of gold coins, a key, and a single manuscript page that appeared to be a map.

Unfortunately, while the party took their sweet time looking over the map a swarm of black hummingbird-like creatures came over the wall and swooped to attack. Henry and two men-at-arms fell to their bloodsucking. Ehud and Anselm took to their heels immediately with the baby and the treasure. Ricarda went down while her porter and hired sword arm fought on desperately until all the creatures were slain. They carried her body and managed to catch up to the others outside the convent where all headed back to the village.

So, out of ten members the party lost four: a fighter and three hirelings. After selling the mice and gathering some information the party set about looking for manpower with a vengeance. Anselm managed to raise three men-at arms, Ehud two, Ricarda had no luck, and Cedric became a full fledged member of the party and hired his own guard.

The party was determined to be quick and efficient, this included smashing the iron lock on the convent's front gate rather than walking around to the break in the wall they had used before. Unfortunately the banging on the lock drew two giant ants, one of them lager than they had seen before, the size of a shetland pony. The men-at-arms circled the beasts but no spear or sword could do anything against the hard carapaces. With the party's desperation growing, Ricarda cast sleep, felling the ants.

After poking around the manzanita to make sure they had missed no books, the party entered the central church. Inside they saw the walls had been smeared with earthtones by small hands, the altar desecrated with a tiny dried body stuffed with manure. The church had two squint holes looking into anchorite cells, one of which the wall-smearers had apparently given a wide berth. Hireling Wilmar, on looking through the window, cried out and fell, paralyzed but breathing.

The party decided to leave whatever was in the cell alone. Ehud's investigations led to the discovery that the altar held the secret to opening two heavy iron plates on each side of it. Each plate opened to reveal narrow stairs leading down.

Some Bad Choices in the Depths 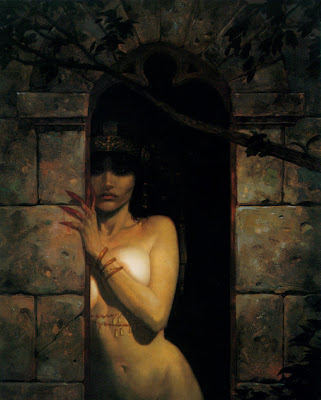 The still-paralyzed Wilmar was hidden behind the altar and the party advanced down the stairs on the left. They found themselves in a large, barrel-vaulted room. Towards the center of the room, a dim blue glow led them to the skeletal remains of someone kitted out like themselves. This unfortunate was still holding a glowing misericord.

While the party investigated the remains, Ricarda heard the sounds of naked feet running on the stone in the darkness. She screamed and pushed closer into the center of the party. Cedric saw a milk-white naked woman run past, but kept it to himself.

After the party searched the area, they found another set of stairs down and chose the right most. A grunt from Ricarda who was bringing up the rear with her porter, alerted the party to danger. With some panic they decided to push on an found themselves in a dead-end passage with five holes in the floor covered by stone slabs. Investigation revealed the remains of immured anchorites and a small cache of valuables, including the information they were seeking.

On climbing back up the stairs they searched the large room again and found the grisly remains of Ricarda and her porter. The white woman finally revealed herself, apparently drawn to the group by a hunger. Eldred, a hireling was paralyzed under her blow and things looked grim until the hireling Udonathar impaled it on his spear.

Paralyzed Eldred was placed in a corner near the remains of poor Tom the porter so the party could go down the remaining stairs. They found a narrow passage with five locked cells and caught a glimpse of white moving in one which made them decide it was time to leave.

On ascending the stairs they were shocked to see a large pack of giant rats feasting on poor Eldred in the corner. The pack turned on the party and Ehud fell under their teeth. The rest of the party manged two slay the rest, driving off two of the wounded. At last the party set their sight home and made for the village as quickly as possible. Those remaining arrived safely. At which point they remembered poor Wilmar left paralyzed behind the altar.

The local priest gave them some clues as to the meaning of the map and begged them not to give the documents they found to the patron that hired them because he fears internecine strife is immanent. The party agreed and plans to follow their map next week.

Oh, and the weerdly growing baby carried throughout the adventure, was bathed and clothed in the village and left outside the walls at the priest's urging.
Posted by Telecanter at 6:39 AM