I'm trying to get my players into the great outdoors.  I'm trying to make a sandbox that will allow them to experience lots of different terrains that feel different.  I'm finding it a lot of work because I'm building it from scratch.

Seasons, weather, travel rates, encounters there's so much to decide about a terrain and then convey to players.  Here's an approach I think I'm going to try.  Rather than have all the season rules in one place in the rule book and the travel rules in another, what seems more relevant is to show the players all the rules that apply to where they are (or are soon going to be).  A single page with every thing you need to know about that terrain.  Well not everything.  I can't fit all this stuff and the special travel challenge mini-game too.  But maybe that can be on the back of the same piece of paper.

Here's my first mock up: 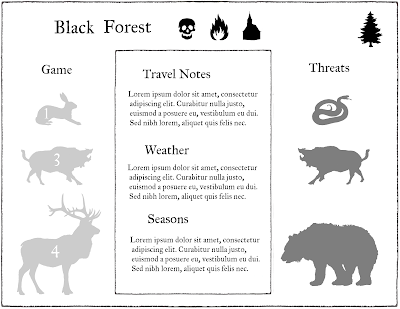 I'll have a better idea of what sections I need as I try to make more terrain.  For now, the mockup shows the most common threats on the right and the most common small/medium/large game animals on the left.  The game animals are for use with Talysman's cool Simple Hunting rules.  Also with my survival rule of one hit die yielding one ration of food.  This will give you an idea going in what dangers to be on the look out for and what the possibilities for living off the land are.

Some terrains may have no game animals at all-- blighted lands and such.  Also note with the mock up that one of the food options is also dangerous.

One of the benefits of silhouettes is that they can convey information even if small, so there isn't really a need for these to be so big.  I like it aesthetically.  You could make  them smaller and fit more monsters/animals on but I wouldn't want to over due it.  These might be just those folks know about.  Other mysterious dangers could be encountered.

The middle section is for any special notes about travel, seasons, and weather particular to this type of land.

I put a row of silhouettes by the name.  They don't mean anything.  But I was thinking if there were certain categories of information that come up again and again maybe they could be iconized to make things simpler.  So, maybe for these three it could be: yes the plague is here, threat of fires, and villages present (or maybe small rural settlements not even of village size).

Of course this might all seem silly and obvious in a "the forest has trees" type of way.  But it might not be for your Burning Tire Wastes or Crystal Deserts.  And if nothing else it's helping me as DM sort out in my head how to differentiate this terrains in a simple yet interesting way.  Let me know you thoughts.
Posted by Telecanter at 4:49 PM