First Steps in the Sandbox

I'll share what I came up with and showed my players last Friday as I try to expand and improve it for our session tomorrow.  We'll be going up to a cabin to play so I want to have all my ducks in a row.  Here is a pic of the sandbox map I showed them: 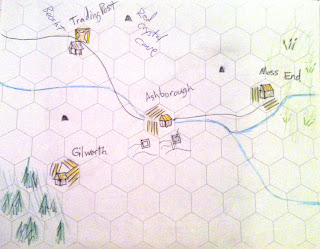 They started in Ashborough and had just cleared out a Dwarven Outpost last session.  (Though they don't know the weird dungeon was Dwarven).  I told them they could move 3 hexes in a day.  To the east, a wise woman that sometimes comes in from the swamps to visit Moss End has the ability to farsee.  To the west a trading post.  South west is Gilworth, a town known for raising fighting dogs because of constant attacks from the woods.  There are caves located near the trading post and the other two villages.  There is also another Dwarven outpost in the hills near Ashborough.

So, pop quiz, where do you think my players went?  While you think about it I'll give you some more behind the scenes info.  The Dwarven outpost I already had prepared from a different set of friends I ran through it.  I had maps for all three caves.  I had maps ready for Moss End and Gilworth.  I didn't really have anything else ready-- no wandering monster tables for the roads or the plains.  Not even interesting treasures and monsters for the caves.  Trying to prepare four possible dungeons was just too much.  I can see why someone would want to by a product that would have at least the bones of this laid out.

Okay, got an answer?  The clue is that they just cleaned out a dungeon last session.  Heavy with coin, of course they wanted to go shopping.  I should have guessed.  They made a beeline to the trading post and then after shopping for a long time, headed to Red Crystal Cave, explored a bit, got in a battle and then left the cave to camp outside an end the session.  I think I'll just drop some bullet points of things that stood out to me:
Okay, so what do I want to do in preparation for tomorrow?  I need encounter tables for the roads.  This is turning out to be harder than I imagined because it sort of sets the tone and danger level for the whole world.  Is this world a place where dragons can be seen flying over the roads or are they rare and hidden away?  Is this the sort of road where bandit attacks are so common that it is safer to travel through the wilderness than on the roads?  I don't know.

I'm not sure what they will want to do next time.  (I know I should have asked explicitly but it was late.)  They may want to go back into Red Crystal Cave and explore it more since they are right outside.  They may want to go to the Dwarven outpost because they found good treasure in the last one ( a player said this).  Or they might head to Gilworth because I think they are interested in getting dogs.

I would like to expand the map so they start getting a sense of more options.  Maybe growing the sandbox a little each session would be a good goal for me.  I scavenged the remnants of an easal pad from work and can center my map on it and that will provide a~2x2.5 ft map to work with and gradually fill up.

I need to assign health scores to the villages.  I am excited about how excited my players were to that idea.  I wish I had a simple goods system so that not everything on an eqipment list was available at every trader/merchant.  But that is a place where computers have me beat.  I don't want to roll for every stinking good to see if it's present.  Maybe just roll once with a percentile and that item is out.  But I don't know, seems ripe for a mini-game.
Posted by Telecanter at 10:28 AM